Whiley, the 2015 US Open singles champion, was crowned winner of the open women’s singles event as she impressed in her first tournament since giving birth to her first child earlier this year.

The National Championships were staged alongside the conclusion of the Roma Sports National Series Finals, with the Shropshire Wheelchair Tennis Group proud to be asked to act as hosts.

Tournament officials were delighted to welcome Whiley, 26, who has also won doubles titles at all four Grand Slams and two Paralympic Games medals, to Shrewsbury.

Scott Smith, one of the local club’s organisers, said: “It was great to have a player of Jordanne’s calibre taking part in the National Championships as she begins her comeback after having a baby.

"It was also fantastic to have other players involved in the Great Britain programme like Lauren Jones and Ruari Logan competing. It made it a really strong event with more than 50 players taking part, including the largest junior entry we have ever known in Shrewsbury.”

He added: “It was another excellent event, the second time The Shrewsbury Club has been chosen to stage the National Championships, and it went very well. The matches flowed, the players were impressed with the resurfaced courts and we received lots of very good feedback.

“The Shrewsbury Club’s staff were very helpful and we are hopeful that the National Championships will continue to be held here.”

Scottish player Ruari Logan was the winner of the open men’s singles event. There were also trophies for Dahnon Ward, the winner of the boys' singles first division, and Joshua Johns, who topped the second division.

The open women’s doubles champions were Lauren Jones and Jessica Webb, with Ward and Abbie Breakwell the winners of the junior doubles.

The winner of the Roma Sports National Series men’s title was Asif Abbasi. Gary Cox took the quad singles prize, with Nicolette Erevik successful in the novice singles, while Logan partnered Mark Langeveld to victory in the doubles.

There was also good news for the Shropshire Wheelchair Group, named as winners of the National Series tournament of the year accolade for its popular Shrewsbury Summer Open.

Smith said: “It’s the fourth year in a row we’ve won the award. It’s great to be recognised for the event we put on each summer, particularly as it’s voted for by the players.”

Claire McCulloch, the interim disability competitions manager for the Tennis Foundation, added: "Record numbers of disabled people are playing the sport across the Tennis Foundation’s network of venues and we are delighted to have hosted our year-end domestic finale at The Shrewsbury Club once again.

"The venue has a long history of hosting National Series events and, as always, pulled out all of the stops to welcome our players.

"There was a tremendous atmosphere on-site over the entire weekend and the fact we had over 50 competitors playing, including some extremely talented juniors, signifies just how much our sport is growing. We’re already excited to come back next year!”

Picture: Jordanne Whiley with the trophy she won at The Shrewsbury Club. Picture: Tennis Foundation. 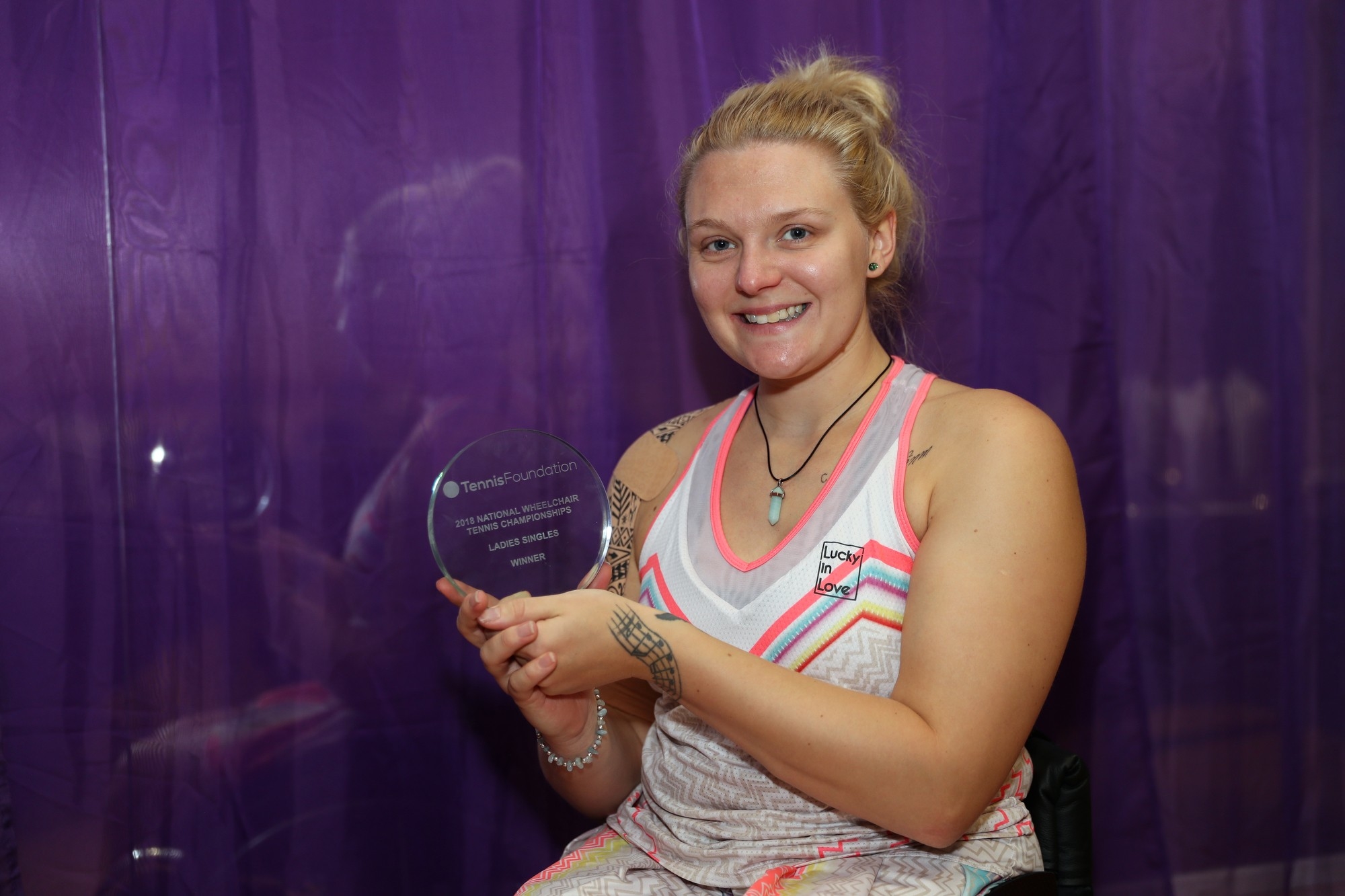