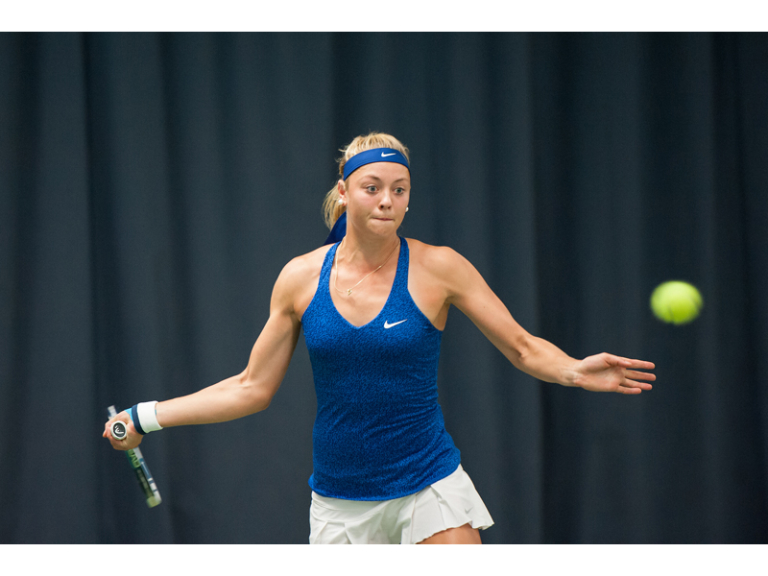 French qualifier Oceane Dodin will meet rising German star Carina Witthoeft in the ladies singles final at the $25,000 Aegon GB Pro-Series tournament at The Shrewsbury Club this yesterday.
The highly promising teenagers successfully came through entertaining semi-finals at the Sundorne Road venue yesterday to set up an intriguing clash.
Dodin, ranked 559 in the world, has had to come through six matches to reach the final.
Won two qualifying rounds
The 17-year-old from Lille, who won two qualifying rounds on Sunday and Monday to earn a place in the main draw, claimed another notable scalp in the last four as she got the better of No 5 seed Yuliya Beygelzimer, beating the Ukrainian, nearly 400 places above her in the world rankings, 6-3, 7-5.
Dodin's other victims this week have included Russian Marta Sirotkina, last year's runner-up at Shrewsbury, as she continues to play some excellent tennis.
The other semi-final saw Witthoeft, 19, from Hamburg, maintain her blistering run of form with victory in three sets over Belgian An-Sophie Mestach.
Chalking up another win
Witthoeft dropped her first set of the week but still managed to chalk up yet another win as she prevailed 6-3, 5-7, 6-2, displaying the strong form which has propelled her up the world rankings to 132 in the current standings.
Having claimed victory in each of the last two tournaments she's entered, a $25K event at Barnstaple followed by a $50K competition at Saint-Malo in France, Witthoeft, seeded three this week, will now be determined to seal a hat-trick of successive titles.
The spectators for the semi-final action included Michael Downey, the chief executive of the LTA.
Elsewhere, there was Dutch delight for Richel Hogenkamp and Lesley Kerkhove, the No 4 seeds, as they overcame unseeded German Nicola Geuer and Viktorija Golubic from Switzerland to take the doubles crown in an enjoyable final.
Sealing victory
The Dutch duo won the second set 7-5 after losing the opener 6-2 before sealing victory 10-8 in a Championship tie break.
That leaves just one match to complete the exciting tournament, today's singles final, which begins at 2pm with a stand assembled at court side for spectators to enjoy the action. Admission is free.
More