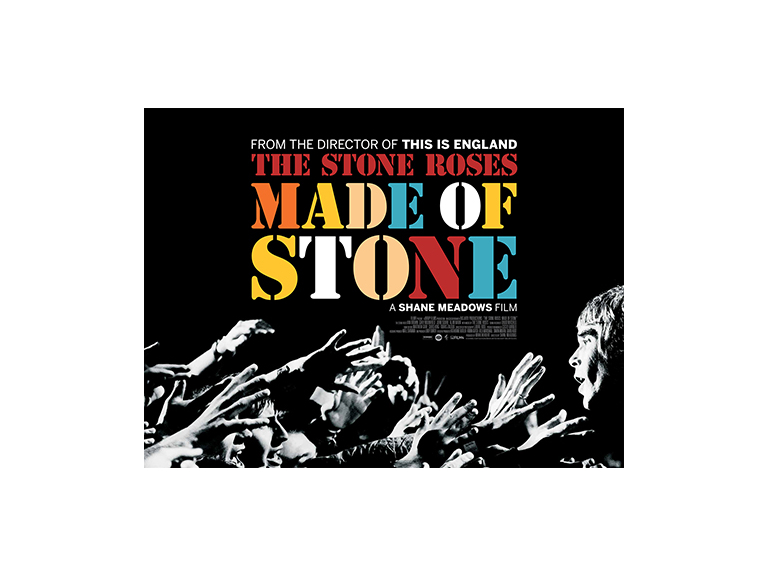 Shrewsbury Cineworld Cinema was one of 200 cinemas around the country to stream the premiere of the Stone Roses documentary film - Made of Stone, live.

The auditorium was full of fans. You don't always get to share an intimate cinema-going experience with people who really care about what they are watching. But this time, we did.

The Stone Roses are arguably (I would say indisputibly but better not start an argument) one of the most influential bands of the 21st century and the best band to come out of Manchester (even Noel Gallagher says so in the film).

Directed by the inimitable Shane Meadows who has bought us such gems This is Englands and it's spin off TV series' and partnered with his long-term collaborator produce Mark Herbert, this was a film that lovers of The Stone Roses, lovers of well crafted films and lovers of Bristish music in general, have been waiting for.

On Friday 18th November 2011, the legendary group  announced what fans could only dream about for 16 years – Ian, John, Mani and Reni were back together. This was despite the fact that just a few years earlier John Squires said it would never happen and through his infamous metaphor described the band as dead. But old friendships die hard, and thankfully, the band put their differences behind them.

In a taxi on his way to a film festival, the acclaimed Mr Meadows receives a call from frontman Ian Brown who tells him the Roses are reuniting. His favourite band of all time wants him to shoot the press conference revealing their news to the world, but Meadows wants to capture their reformation in all its glory and as he explains through appearances in the film himself, it was a case of softly softly catchy monkey, until the band wanted him and his accomplice Mark around all the time.

This isn’t your standard music documentary – don’t expect a formal interview with Reni sitting in front of his drum kit explaining why he quit in '95. But it is intimate and feels like the band’s biggest fan has been given an access-all-areas pass and you share his excitement as his boyhood heroes prepare for their triumphant homecoming shows in Heaton Park.

The film was always supposed to be a celebration. Not a rehashing of who said what, how bust-ups with management and court injunctions really hampered this bands success, let alone survival. If you are a fan you know all this. If you're not, you develop a comprehensive understanding through video clips, news footage and press cuttings.

Reni's refusal to perform an encore in Amsterdam as part of the band's European warm-up gig to Heaton is shown. But rather sensibly, Mr Meadows, chooses not to shove a camera in the bands faces during this upsetting time. Something for which the rest of us should be grateful. As in all probablity, adding to the heat of the situation and the bands newly forming Bambi-legs of a friendship, could have tipped the balance and those of us who wanted them to make it out onto the stage at Heaton Park could have lucked out.

Meadows split-screens the foursome’s first rehearsals and they are a real treat. In a live question and answer after the film's innaugral screening, Meadows explained the lengths he went to, to capture the delicate glances between the foursome as they reheased. And more than anything, the film is about enduring love and friendship.

The most breathtaking shot of the film is the very first one, as Brown walks across a front row of Roses fanatics before the first Heaton gig in super slow motion. It’s absolutely stunning and impossible not to smile when the singer grabs a phone from a young teenager and looks straight down the lens for a mid-gig selfie, before handing it back to the boy who has won a lifetime of lotteries in that moment.

The best moments of the film, described by all involved with it as such, were the scenes depicting locals flocking to Warrington Parr Hall to snap up one of just 1000 wristbands to see their heroes' first ever outing after reforming.

From every walk of life they came, with one admitting he left work pretending his father-in-law had suffered a heart attack and another having just bulldozed down a wall in someone's property and just legging it. Each fan had to arrive with a treasured talisman to reveal their fandom before being granted just one wrist band. Cue some very miserable people indeed who missed out.

The build up to that gig makes you nervous for everyone in that room and the explosion of noise inside the 1,100-capacity venue when they take to the stage will make the hairs on the back of your neck stand up.

This is a documentary film celebrating an adored band. There’s humour throughout as Meadows twists fantastic archive footage (including one hilariously awkward interview from 1989) with gold from last year’s reunion.

Fans will love it and anyone who doesn’t appreciate the impact The Stone Roses had on people’s lives certainly will after watching this. A new generation of Stone's fans is upon us. Miss this at your peril.