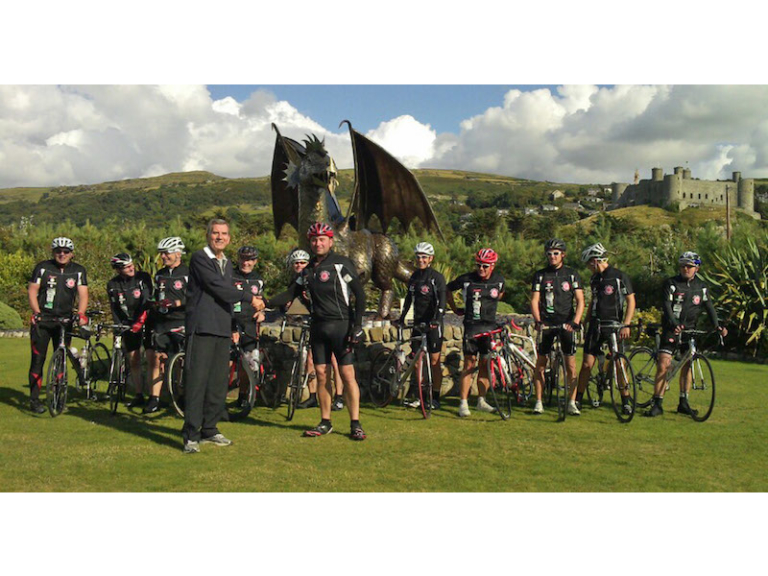 Eleven cyclists who pedalled 115 miles and over 800 metres above sea level over the Berwyns mountains from Telford to Porthmadog last weekend hope to raise around £3,000 for The Layla Jane Pitt Remembrance Trust.

The trust - http://www.laylas-trust.co.uk/ - was established by parents Tristan and Rachel Pitt in memory of their 11-year-old daughter Layla who died at Alder Hey Children’s Hospital after suffering a catastrophic brain haemorrhage whilst on holiday with her family in Porthmadog in August 2008.

To mark the tragic anniversary, 10 work colleagues and family friends of Tristan, a sales executive for Greenhous Vauxhall at Trench Lock, Telford, joined him on the sponsored cycle ride to Porthmadog from his work place.

Continuing in the way Layla always wanted to help others, the Trust supports children in performing arts education as well as offering support to other bereaved families and life limited children. The Trust continues to support Hope House Children's Hospice as well as Alder Hey Children's Hospital.

One of the sponsors of the cycle ride was caravan and motorhome dealership Salop Leisure which has sales centres in Shrewsbury and Machynlleth. The cyclists called in at the company’s Shrewsbury headquarters and also visited Min-y-don Holiday Home and Touring Park in Harlech where they were greeted by Salop Leisure’ chairman Tony Bywater and had photographs taken with the impressive Dewi the Dragon sculpture.

Mr Bywater said Salop Leisure was delighted to support such a good cause in memory of Layla.

Tristan said his family has committed to raising £10,000 to name a room at the new Alder Hey Children's Hospital after Layla. He thanked people who had sponsored the annual charity bike ride from Telford to Porthmadog and said around 10 cyclists had already volunteered to take part next year.

The Trust's next fund raising event is their popular annual charity ball at Patshull Park Hotel, Golf and Country Club, Pattingham on November 15th, tickets for which are available now. Details can be found HERE.