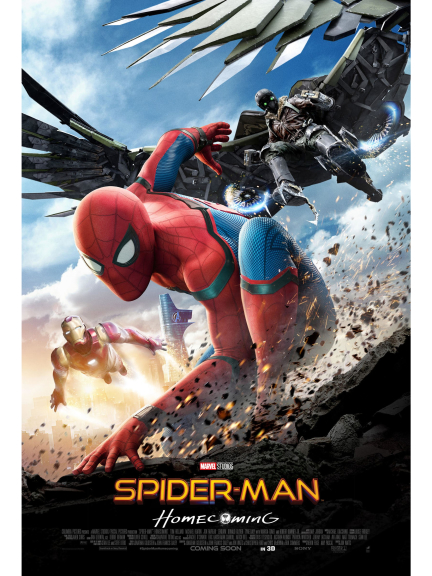 As the third reboot of a franchise and the sixth Spider-Man film in fifteen years, we thought they couldn’t do much more with the web-slinging hero. Could it possibly be third time’s the charm? After seeing Marvel’s latest instalment at Cineworld Shrewsbury, we can officially answer: YES.

Spider-Man: Homecoming is a blast of a summer blockbuster. We grabbed some popcorn and drinks and joined Peter Parker for laughs and action as he learned what it means to be a friendly, neighbourhood Spider-Man...

Following his exciting introduction in Captain America: Civil War, Peter Parker/Spider-Man (Tom Holland) returns home to Aunt May (Marisa Tomei), with a watchful Tony Stark (Robert Downey, Jr.) reminding him not to get into trouble. Unsatisfied with high school life, Peter can’t help seeking out adventure, and he soon gets tangled up in a dangerous plot involving The Vulture (Michael Keaton).

We quickly learn that this is a Spider-Man still growing into his powers whilst tackling teen issues. For Peter, passing Spanish tests and talking to his high school crush are just as challenging as thwarting criminals.

Tom Holland makes for a captivating lead character. Funny, caring, brave and at times terrified, he plays and looks the part of a fifteen-year-old hero. He’s backed up by great performances from Robert Downey, Jr. as a reluctant father-figure and Michael Keaton as a refreshingly human and relatable villain.

Where Spider-Man: Homecoming shines is in the comedy and life lessons. The action is brilliant, of course, but this film does a great job at delivering plenty of laughs and heartfelt moments.

Peter is clever, kind and will do anything to help people. As a role model for younger viewers, you can’t do much better.

It’s true we were feeling a bit of Spidey fatigue when the trailers for Spider-Man: Homecoming first came out. We’re glad we decided to give it a chance – now we can’t wait for more!

Thankfully there are some fantastic films at Cineworld Shrewsbury this summer to keep the whole family entertained. Catch Spider-Man: Homecoming, Despicable Me 3, War For The Planet Of The Apes, Cars 3 and Baby Driver on the big screen in Shrewsbury all this month.