Sixty-one teams – one more than last year - from 30 clubs will be competing in five divisions of the Shrewsbury and District Senior Citizens Bowling League this season. Division One begins on March 30 while the other four divisions start on April 13.

A shortage of players has resulted in the withdrawal of Oswestry Church B team, but the league has gained two new teams from Battlefield. 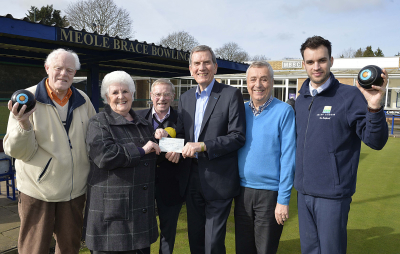 Member clubs span an area stretching from Llanrhaeadr y Mochnant, Oswestry and Wem in the north to Craven Arms and Worthen and Brockton in the south and most of matches are played on a Thursday afternoon.

“The league provides friendly competition and a valued social activity for retired people to enjoy every Thursday,” said league secretary Chris Kershaw. “Having an afternoon senior citizens league enables some of the older bowlers who don’t like bowling in an evening to carry on playing competitively.”

The league has around 670 registered players, 360 of whom bowl every week. Sponsor for the 10th season is Shrewsbury-based caravan, motorhome and campervan dealership Salop Leisure, which has regional sales centres in Machynlleth and Stourport-on-Severn.

In addition to the weekly league matches, there will be three League Knock-Out competitions - the Dick Meyrick Cup for the top 16 teams, the Ron Smout Cup for the next 16 teams and the Sponsor’s Shield for the remaining 29 teams. The preliminary round begins in May with the finals of all three competitions played simultaneously on September 11 on the three greens at Severnside Bowling Club, Shrewsbury.

The league’s annual singles knockout competition will be held on July 5 and the doubles on August 2, both at Severnside Bowling Club. The annual challenge match against the Mid Shropshire Senior Citizens League for the Dixon Cup will be played on September 4.

The season culminates with a President’s Day competition for the Bill Garratt President’s Cup on September 14.

Salop Leisure’s chairman Tony Bywater said the company was proud to be associated with such a successful and well run league. “Many of the players in this league are caravan owners and customers of Salop Leisure who stay active and make the most of their leisure time in retirement,” he said.

“The league is very popular with senior citizens across Shropshire and the Welsh border. Long may it continue to prosper.”