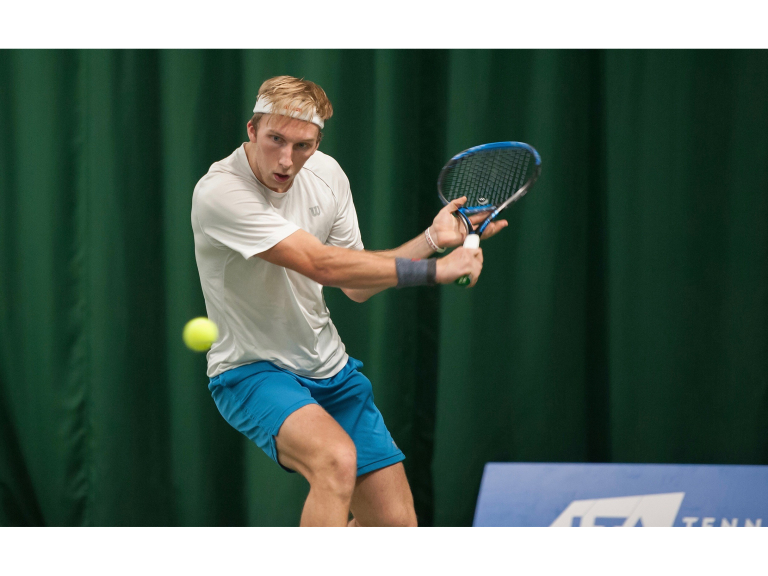 Shrewsbury’s Luke Henley came so close to pulling off a qualifying round victory on the opening day of the Budgen Motors ITF World Tour M25 Shrewsbury tournament.

Henley, 25, a regular member of the Shropshire county side, was narrowly edged out in a third set tie-break at The Shrewsbury Club.
The men’s tournament’s main draw matches begin today (Tuesday, 10am), with top seed, highly-promising 17-year-old Brit Jack Draper, taking on Alexander Jhun.
Admission is free for spectators to watch the tennis throughout the week, including Saturday’s singles final.
Henley, who works in The Hub restaurant at The Shrewsbury Club and also strings rackets at the Sundorne Road venue, received a wild card to face Croatian Josip Krstanovic in yesterday's first qualifying round.
He took the opening set 7-6 before Krstanovic levelled it up by winning the second 6-1.
That meant a tie-break was required to decide the outcome, with Henley, who received plenty of support from the balcony which overlooks the indoor courts, pipped 11-9 to end his hopes of a notable victory.
“You can’t really get any closer than that,” said Henley. "To come back from a couple of match points down and get back to 9-9, to bounce back and compete in the match tie-break after losing the second set quite comprehensively, I was happy with that mentally.
“It was really nice to be able to play again here after playing in the event for the first time last year.
“Then it didn’t go so well, but this time it was really good and there was absolutely amazing support from everyone who came along to watch.
“I really appreciated it and would like to thank everyone for their support as it makes such a difference and makes playing here special.
“It was a very enjoyable experience all round to play here at my home club, where I’ve been a member for years.”
Henley now hopes to build on his impressive display which followed his recent success in the annual Shropshire County Championships.
“I won the three age group competitions that I played in,” he said. "It was actually the first time I’ve won any titles and then they all came along at once. Fifteen years of trying and then I get three in one day, so I was very happy with that.”
It’s now back to the day job at The Shrewsbury Club: “It’s back to reality now,” added Henley. “It’s really nice to play in events like this. You get an umpire, line judges and a good crowd with lots of support. I would love more experiences like this."
Top seed Draper, who reached the boys’ singles final at Wimbledon in 2018, was drawn against fellow British player Jhun at a reception held to launch this week’s tournament at the Featherbed Lane headquarters of Budgen Motors in Shrewsbury last night.
That will be the second match on Court 1 today following Italian Julian Ocleppo, the second seed, facing Brit David Fox.

Now's the time to look at year end tax planning