Shropshire's tennis community celebrated the achievements and dedication of the county's players and volunteers as the local winners of the Aegon British Tennis Awards were announced.

An evening of prizes

The Shropshire winners will now go forward to represent the county at the regional awards for the West Midlands early next year ahead of the national presentation ceremony at Wimbledon next summer.

Bob Kerr, the chairman of Tennis Shropshire, congratulated all of the winners and thanked The Shrewsbury Club for its generous support of what is hoped will become an annual event in the county tennis calendar.

He said: "It was a great night and well supported. This is the first time we have held an awards dinner and everyone who attended enjoyed themselves.

"Each of the nominees was invited to attend with a guest and it was lovely to be able to recognise the efforts of the very worthy winners.

"The idea of the awards being introduced by the LTA was to acknowledge the work and commitment put in by volunteers across the country. It actively encourages people who play tennis to recognise that without the level of commitment and time other people put into clubs that the opportunity to play tennis probably wouldn't exist.

"It's lovely to be able to highlight the volunteers on our own doorstep here in Shropshire that have made such a commitment to the sport. It's nice to show that what they do is appreciated and to give them our thanks." 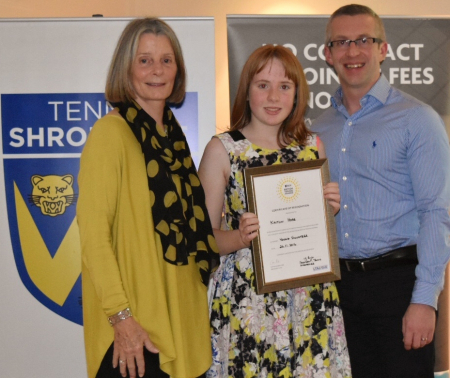 Pictured: Young volunteer of the year Kaitlin Hope, from Telford Community Tennis Club, with Liz Boyle, the president of Tennis Shropshire, and Alvin Ward, the general manager of The Shrewsbury Club.

Holly Mowling, the coach at Bridgnorth Tennis Club, proved to be the night's big winner as she scooped two awards. As well as being named coach of the year, she was also the winner of the outstanding achievement award after a memorable 2016 in which she won a hat-trick of top national tennis titles on the International Tennis Federation over-35s circuit.

Holly was also instrumental in Bridgnorth being named as club of the year.

Young volunteer of the year

The awards evening also featured an interview on stage with former Wales international footballer Alan Durban, who remains a keen tennis player, as he shared stories of his sporting career, which included an enjoyable spell as player-manger at Shrewsbury Town.