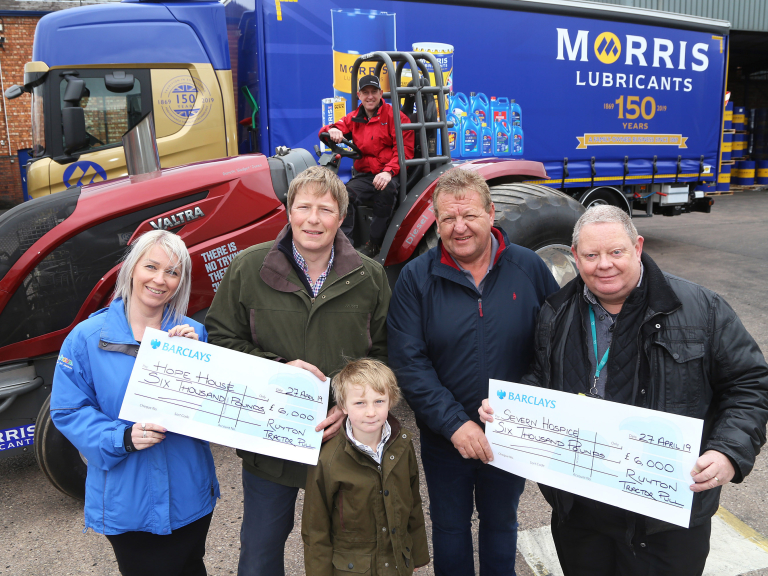 Gary Penton, a director of Oswestry-based haulage company Pentons, has organised the Ruyton X1 Towns Charity Tractor Pull for the past eight years, raising in excess of £80,000 which has been shared by Severn Hospice in Shrewsbury and Hope House children’s hospice in Morda.

Despite disappointing weather on the second day of the two-day event last October, Mr Penton still managed to raise £6,000 each for the charities. Due to the Covid-19 pandemic, the money was sent to the charities without an official presentation.

This year’s event has been cancelled as Mr Penton looks towards April or May next year to hold a test event, possibly at Montford Bridge Airfield.

“I appreciate the support of the Hamlett family and all the sponsors that make it possible to hold the charity tractor pull,” said Mr Penton. “I am trying to grow the event to make it bigger and better.

“It attracts around 2,000 people over the two days, but last year it poured down on the Sunday which meant that some of the heavier tractors were unable to run.”

The event attracted tractors from across the country and spectators were able to watch action on one track. Mr Penton competes in the British Tractor Pullers Association Championship.

Explaining why he supports the two charities, he said: “My wife and I have both lost family members and friends to cancer and we have seen at first hand the fantastic work that hospices do. It was my wife’s suggestion that I organised a tractor pulling event to raise money for the hospices.”

His family’s association with Hope House began when Pentons agreed to take children from the hospice for ride in a lorry to Llangollen. One of the children was a boy who died shortly after the trip and Mr Penton has never forgotten his smile.

Morris Lubricants’ executive chairman Andrew Goddard said: “We are proud to have been associated with Ruyton X1 Towns Charity Tractor Pull since its inception and have a valued, long-standing relationship with Pentons.

“Gary and his team have raised an amazing sum of money which makes a real difference to these two fabulous local charities who have never needed support more than now.”

Lynsey Kilvert, fundraising team leader at Hope House, said: “We are so grateful to have received support from the Ruyton XI Towns Tractor Pull for the past eight years. Gary and the team work so hard to put on the weekend event and to raise as much as they can for charity.

“Around 80% of the monies we need to continue supporting local children and families comes from incredible supporters like Gary and his team. Thanks to their kindness, we will do everything we can to ensure no family suffers the death of a child alone.

Norma Ross, director of income generation at Severn Hospice, thanked Mr Penton and his team for their “phenomenal” work in organising the event. “Severn Hospice very much appreciates being a beneficiary of this fabulous event,” she said.

“To have raised so much money for charity over the past eight years is an amazing achievement and a tribute to how popular the event is. The money raised makes a huge difference to our patients.

“It’s a very challenging time for the hospice with all our fundraising events this year cancelled due to the pandemic. The hospice is very fortunate to have the support of very kind people like Gary and his team.”