Talented young tennis players from around the county showcased their ability as the Shropshire Junior County Championships delivered a feast of quality action throughout an enjoyable week at The Shrewsbury Club.

The popular annual event, organised by Tennis Shropshire in conjunction with inspire2coach and sponsored by Deloitte, attracted 240 entries in the singles and doubles competitions, which were open to players aged from under-eight through to under-18s.

A men's competition also proved a big hit with a strong field of 24 players battling it out for honours, with Ed Gibbs eventually beating Alex Parry in the final. Gibbs knocked out No 1 seed Luke Henley in the semi-finals while Parry got the better of Matt Jones in the other last four clash.

Bob Kerr, the chairman of Tennis Shropshire, was delighted with the tournament, which was previously known as the County Closed, and hailed it as a major success.

"It was very well supported," he said. "The numbers were similar to last year with 240 entries in the different events from the 135 players which took part. There was a lot of excellent tennis played and it was lovely to see the youngsters enjoying themselves on court.

"Finals day was held on Saturday, starting at 9am, followed by the presentation evening when the medals and certificates were handed out by Liz Boyle, the president of Tennis Shropshire, and Paul Sanders, a director from Deloitte, the event sponsors." 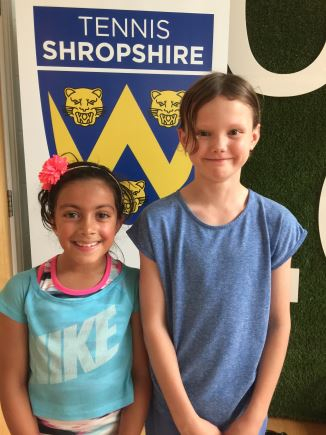 Pictured above: Sarah Jayne Dudley, right, the winner of the 9U girls singles with runner-up Imani Shah.

A high quality of tennis

Tournament referee Simon HaddIeton, who was supported by tournament director Merrill Holt, stressed he was impressed with the quality of tennis played throughout the week.

He said: "It really was a great week and it was great to see so many local players competing. The doubles event was also very popular with more than 50 pairs entering while to get 24 players in the men's draw is really unheard of at county level.

"The future of tennis within Shropshire is certainly bright and there's a lot of talented players coming through."

As well as the prizes handed out to the age group winners and runners-up, there was also a number of other special awards presented.

Matthew Campbell and Imogen Dudson were selected as most improved boy and girl respectively, while the Keith Smith Award for the best achievement during the tournament went to Kornel Rogaczewski, winner of both and U9 boys singles and mixed doubles competitions.

The Shropshire Stars for conduct on and off the court were Amy Dean and Oli Cores Birch. Amy Humphries received the Claire Mowling Cup for determination and dedication while Spirit of Tennis Awards were presented to Callum Cheng and Beth Dean.