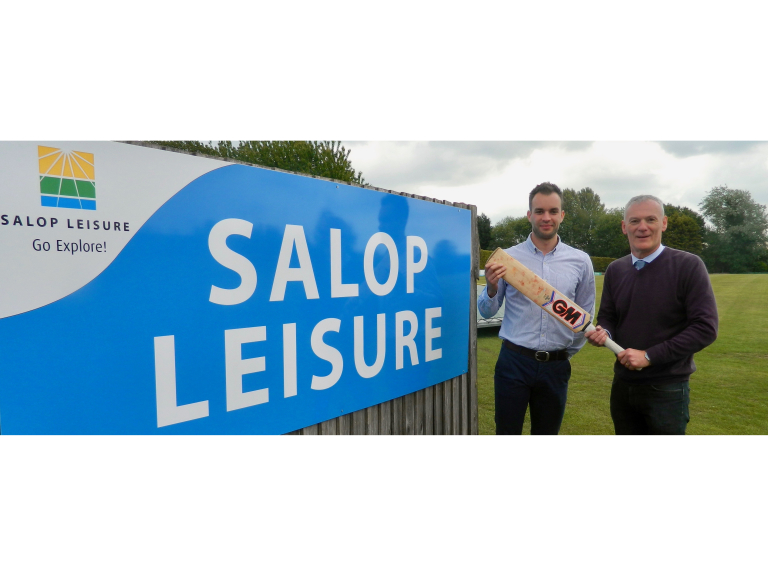 Wem Cricket Club, the reigning Shropshire County Cricket League champions, are proud to be at the heart of their local community as they target another successful season on and off the field.

The north Shropshire club, delighted to win the premier division title last year, have enjoyed another promising start to the new campaign.
Always keen to improve the facilities at their Soulton Road ground, Wem are grateful for the support they receive from local businesses.
Salop Leisure, the Shrewsbury-based caravan, motorhome and campervan dealership, is the latest company to become a club sponsor by taking an advertising board at the ground.
Wem chairman Shaun Astley said: “We are always looking to improve our facilities. We’ve got a number of projects on the go at the moment, so any help that local businesses like Salop Leisure can give is always gratefully received.
“We invest the money back into the club for the benefit of all our members and the local community because we pride ourselves on being at the centre of the community.”
As a club, Wem are thriving, running three senior weekend sides, two midweek teams and a number of junior age group sides.
Wem’s ladies cricket team has also just been reformed, with 35 players signing on to be involved this summer.
The club’s first team, captained by Sam Peate, has enjoyed a bright start to the new season.
Chairman Shaun believes this year’s premier division looks much stronger with three clubs - Newport, Wellington and Whitchurch - returning from the Birmingham League.
He added: “I think it’s going to be a challenge this year as the league’s extremely strong. Everybody else has stepped up and I think every club has got an overseas player.
“We’ve been lucky over the years with our group of players as they have grown up together.
“Our aspirations are to be in the top three if we can and see where we go from there really.”
Ed Glover, Salop Leisure’s marketing manager, said the company are pleased to be supporting Wem.
“We enjoy supporting local sports clubs and leagues,” he added. “Providing Wem Cricket Club with some sponsorship takes our support into north Shropshire.
“We have been impressed with Wem’s willingness to be involved with their local community and we wish them a successful season.”