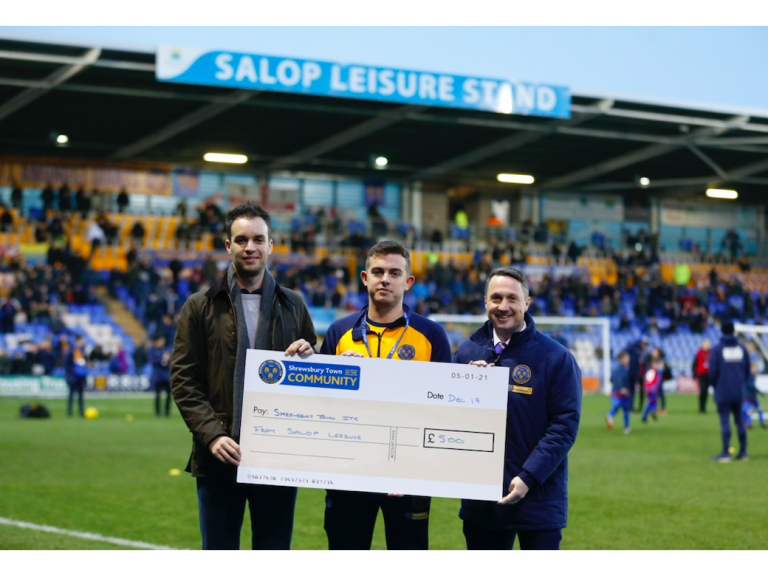 A charity fun run in Shrewsbury, which attracted 280 runners dressed as Santa and his elves earlier this month, has raised £500 to support the work of Shrewsbury Town in the Community.

The Salop Santa Dash for adults and Elf Dash for children under the age of eight were organised by caravan and motorhome dealership Salop Leisure and the company’s award-winning Love2Stay resort.

Shrewsbury Town in the Community is independent of the football club, self-funded and needs to raise £1 million a year to deliver 39 different programmes for people of all ages in the community.

Ed Glover, Salop Leisure’s marketing manager, said: “We are delighted that this year’s successful Santa Dash and Elf Dash raised £500 for such a deserving local charity and would like to thank all those who supported the charity event.

“We are already planning next year’s event which we hope to make bigger and better to raise even more money for charity.”

The Santa Dash and Elf Dash were part of the Salop Christmas Adventure at Salop Leisure and the Love2Stay resort, with activities and attractions set to run until Christmas Eve. Full details at www.salopchristmas.co.uk.

Jamie Edwards, chief executive of Shrewsbury Town in the Community, said: “'We are delighted to have received this donation from Salop Leisure. There is always a great need for unrestricted funds within the charity to help us invest into our different projects across Shropshire and make them the best they can possibly be.

“The support of local businesses is always vitally important and we are extremely grateful for the continued support from Salop Leisure."

Help! My Windows Are Turning Foggy

Bumper catch of 3,130lb at Shropshire fishery’s weekend doubles festival
Sign up for offers
Sign up for what's on guide
Become an author
Popular Categories