Lauren McMinn's hopes of progressing to the main draw of the $10,000 Aegon GB Pro-Series tournament in her home town ended with defeat in the first qualifying round.

Shrewsbury's McMinn, 23, was beaten in straight sets by fellow Brit Katarzyna Pitak when she was first on court at The Shrewsbury Club yesterday as professional tennis returned to the town. 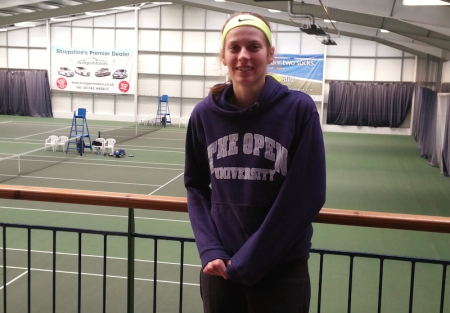 Having lost the opening set 6-1, McMinn led 5-2 in the second before eventually losing on a tie break 7-6 as she made an early exit.

McMinn said: "It's disappointing to lose obviously, but I haven't had an ideal training week as I've been ill all week, so it was just a case of trying to do the best I can with what I've got on the day and it didn't quite pay off.

"I got off to a slow start but I was quite pleased with how I competed in the second set. It was a shame not to close it out and at least take it to a decider."

McMinn had beaten Pitak at Loughborough earlier this year, but this time the 18-year-old from Somerset gained the upper hand to book her place in today's second qualifying round.

McMinn added: "She's a very good player. She plays a lot, she's very solid, she knows how she likes to play and has a specific game style and she goes out there and does what she does. She played very well."

McMinn, who received plenty of support from local tennis fans, now hopes to line up in the doubles event of the popular Aegon tournament later this week.

"I am hoping to play doubles and hopefully we'll get into the draw," she said. "I should be playing with Alicia Barnett from Gloucestershire. We've known each other for years, so it will be nice to get back on court with her."

Today's second qualifying round begins at 10.30am with eight matches scheduled ahead of the main draw being held during a civic reception to launch the event at University Centre Shrewsbury tonight.

This week's international field of entrants features American Alexandra Stevenson, once ranked as high as 18 in the world and a former Wimbledon semi-finalist in 1999, when her memorable run at SW19 was eventually ended in the last four by Lindsay Davenport.

A host of rising British stars are also taking part with Maia Lumsden the highest ranked.

Admission to watch the tennis on The Shrewsbury Club's indoor courts - including the singles final next Saturday, November 12 - is free.