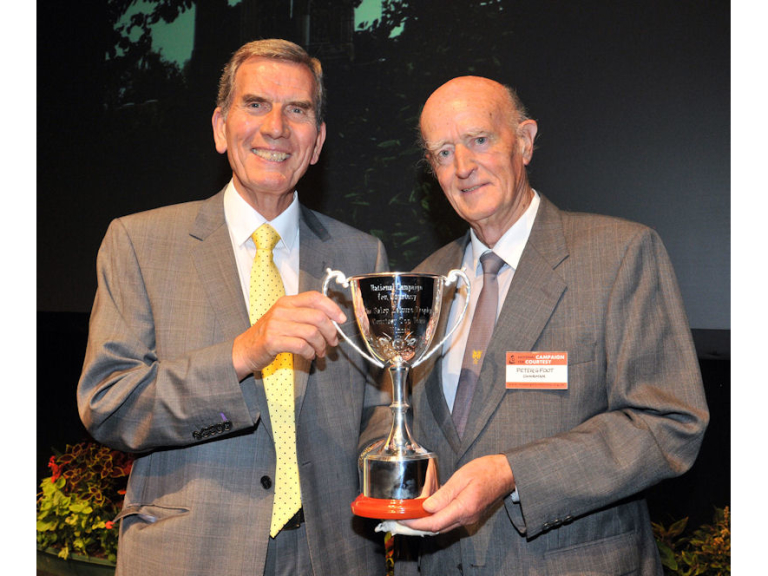 A new cup to be awarded annually by The National Campaign for Courtesy to the most courteous town in the UK has been won by Shrewsbury.

The perpetual cup has been donated by leading caravan dealership, Salop Leisure, which has sales centres in Shrewsbury, Stourport-on-Severn and Machynlleth.

Fittingly, the first winner was announced by the campaign’s chairman, Peter Foot, in Shrewsbury last week to coincide with the Heart of England in Bloom competition results.

Mr Foot thanked Salop Leisure for donating the cup which, he said, would give the campaign an annual publicity opportunity to promote its work across the UK.

“Anybody can make a nomination for this new award, but they must be able to show how the town looks after tourists and visitors and takes great pride in its environment,” he added. “The National Campaign for Courtesy will then try to inspect the town.”

Mr Foot said visits that he and Liz Hall, Central West England regional executive, had made to Shrewsbury earlier this year had convinced them that the town merited being the first winner of the National Campaign for Courtesy’s Top Town Trophy.

“Virtually encircled by the picturesque River Severn, the town’s beautiful parks and floral displays, together with superb architecture, nine churches and a castle all proved very attractive.  “It was all breathtaking and, amazingly, the streets and parks were litter free,” added Mr Foot.

Salop Leisure has long supported the campaign, whose founder, retired Congregational minister Ian Gregory from Newcastle under Lyme, was invited to run a day course for staff in 2007. The campaign stands for good manners, respect for self and others and courtesy for all.

“We have built the company over nearly 50 years on being polite, courteous and caring towards each other and to our customers,” said Mr Bywater. “Politeness and treating people with respect are things that have always been close to my heart and have contributed to the success of the business over the years.

“I think every business or organisation that deals with the public should prioritise politeness and courtesy, which are often in short supply in our society. That’s why we have donated the cup to The National Campaign for Courtesy to honour the town or city that shows itself to be the most courteous in the UK.”

The campaign, founded by Mr Gregory in 1986, exists to encourage those who value good manners and to assess continually what courtesy means in a rapidly changing world.

Anyone who has experienced exceptional courtesy from a person or organisation in the UK can nominate them for a certificate from the National Campaign for Courtesy. The nomination form is available at http://campaignforcourtesy.org.uk/