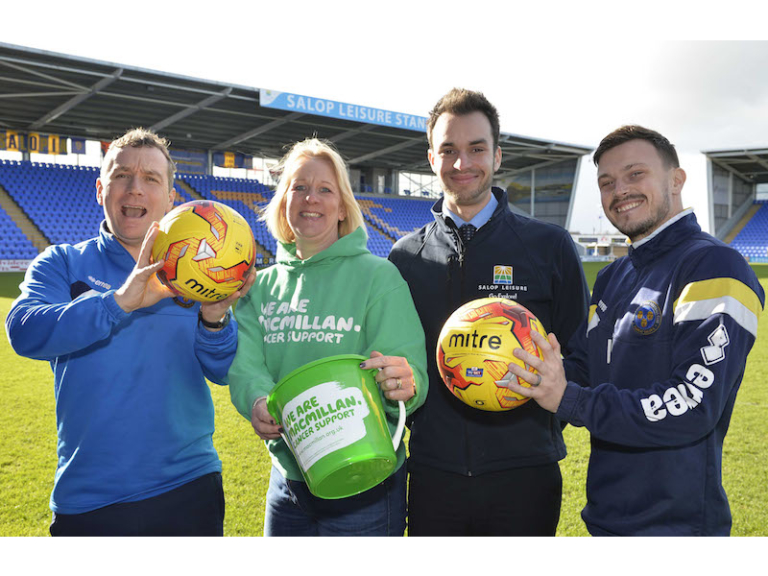 Macmillan Cancer Support will be ‘quids-in’ every time a Shrewsbury Town player scores against Premier League giants Manchester United in the FA Cup on February 22 thanks to a sponsor.

Caravan dealership Salop Leisure, which is celebrating 50 years in business this year, has pledged to pay the charity £100 for every goal scored by underdogs Shrewsbury in their plum fifth round home tie at the Greenhous Meadow Stadium against Louis van Gaal’s star-packed team.

Company chairman Tony Bywater has appealed to other town companies to join Salop Leisure in sponsoring every goal scored by Shrewsbury so that Macmillan Cancer Support will potentially receive even more cash from the tie.

“It’s a fantastic achievement by Shrewsbury Town to reach the fifth round and we wanted to do something to celebrate their success whilst also benefiting Macmillan Cancer Support, our adopted charity this year,” explained Salop Leisure’s chairman Tony Bywater.

“I am sure that Shrewsbury’s players will need little incentive to score against Manchester United, but hopefully our sponsorship pledge might encourage them to bang in a few goals and clinch a memorable victory. It would be great if other companies joined the sponsorship pledge.”

Salop Leisure has sponsored Shrewsbury Town for many years as Mr Bywater says the club is a key marketing tool in putting the town on the map. He praised chairman Roland Wycherley and his fellow directors for the professional way they run the club.

“We are proud that our club has stayed in their heart of the community and isn’t controlled by overseas investors, like many others in the football league,” said Mr Bywater. “The chairman and the directors deserve great credit.

“The Manchester United match is certain to be a sell out, but I would urge supporters to stay loyal to Shrewsbury Town throughout the season and not just support them for one glamour game.

“The club needs supporters to get behind the team through good and bad times so that we can retain a good standard of football in the town.”

Helen Knight, Macmillan Cancer Support’s fundraising manager for Shropshire, welcomed the novel sponsorship idea. “I am backing Shrewsbury to win the match and to score lots of goals in the process, so United goalkeeper David de Gea better be prepared for a busy day,” she said.

“It’s another great fundraising idea by Salop Leisure and Macmillan Cancer Support is delighted to be the beneficiary again.”