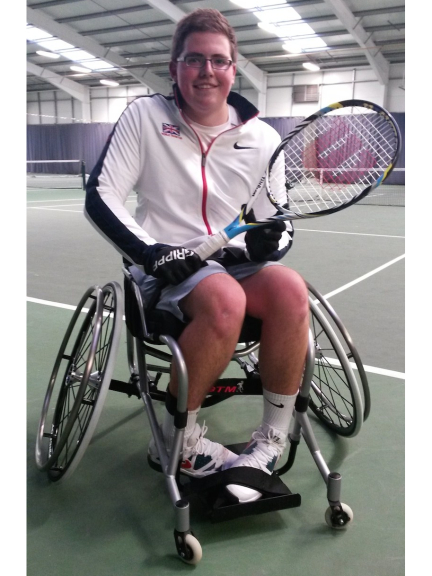 Josh Cooper insists he enjoyed the thrill of making his international wheelchair tennis debut for Great Britain in Turkey.

The talented 17-year-old, who trains regularly at The Shrewsbury Club with Nigel Hunter, the club's director of tennis, was one of three youngsters chosen for the GB junior side to fly to Antalya for the World Team Cup.

"It was absolutely amazing," said Josh. "I met some brilliant people and we stayed at a brilliant hotel, so everything was just fantastic.

"It was a once in a lifetime opportunity, knowing I was representing my county, which makes you want to perform at your very best.

"The junior team came sixth in the end out of the eight countries taking part. We beat our original seeding of seventh, but we know we could have maybe done better, but we were still very pleased.

"I'm never going to forget the memory and it's something which will stay close to me for all of my life."

Josh, who has been playing tennis at The Shrewsbury Club for 18 months, caught the eye of the GB selectors when he attended a Ticket to Tokyo Camp targeting potential competitors for the 2020 Olympics in Japan.

The teenager was already a big tennis fan before being confined to a wheelchair at the age of 14 after being diagnosed with dystonia.

"I had many tests and was diagnosed with dystonia, which is a muscle disorder which affects my legs," he said. "I could walk with crutches but things got worse so I just stick to a wheelchair now."

Josh plays tennis up to four times a week: "I just love playing tennis," he added. "It gives me some independence back and just makes me feel happy.

"I enjoy playing at The Shrewsbury Club as it's really friendly. The atmosphere is geat. There's lots of courts and the people I play with at the club are very nice and offer to help me in any way I can."

The Shrewsbury Club has a thriving wheelchair tennis group which always welcomes new members. Sessions are held on Tuesday mornings and Thursday evenings.