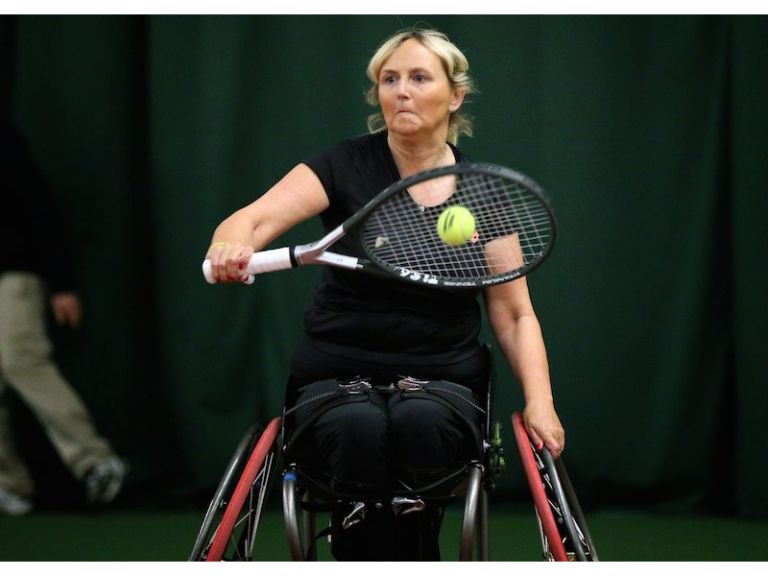 Val Fisher finished an impressive runner-up in both the ladies singles and doubles at the National Wheelchair Tennis Championships as she headed a strong challenge from local players who train at The Shrewsbury Club.

Val stylishly battled her way through to the final of the ladies singles event at Gloucester, hitting top form to beat No 2 seed Laura Coteman in the semi finals, before losing to British No 3 Louise Hunt, ranked 17 in the world, in the final.
It was the second time in three years that Val, who trains under the supervision of Nigel Hunter, director of tennis at The Shrewsbury Club, has finished runner-up at the prestigious tournament.
The Baschurch ace also reached the final of the doubles competition, partnering Debbie Brazier, before the accomplished Hunt, alongside Coteman, sentenced them to defeat.
"I was thrilled to get to the finals in both the singles and doubles," said Val, who has been playing tennis for six years. "I sadly lost both matches on this occasion and Louise Hunt, the current British No 3 proved far too strong and was a worthy winner."
Coach Nigel added: “It was fantastic to see all the hard work Val has put in this year which has taken her game to another level paying off.
“She's volleying more and is now playing more attacking tennis so this was a great way for Val to end the year.”
Val was one of five players from the Midlands Wheelchair Tennis Group who train and play at The Shrewsbury Club each Thursday to take part in the nationals.
Deena Webster, from Grinshill, was the losing finalist in the development series ladies final while Scott Smith and Craig Nicholson competed in the men's event.
There was also a first appearance in the National Championships for promising 16-year-old Josh Cooper.
“Josh has only been playing for three or four months,” said Val. “He came and played in our own tournament in July and we encouraged him to take part in the development series which runs alongside the nationals.
“We all had a great time in Gloucester and are already looking forward to our next event in February at Preston which will be the first of the International Tennis Federation events held in Great Britain.”
Val added wheelchair tennis at The Shrewsbury Club was in good shape with 16 players affiliated to the Sundorne Road venue.
But there is always room for more people to pick up a racket and give tennis a go. To find out more details they should contact Nigel Hunter at The Shrewsbury Club on (01743) 467755.
More