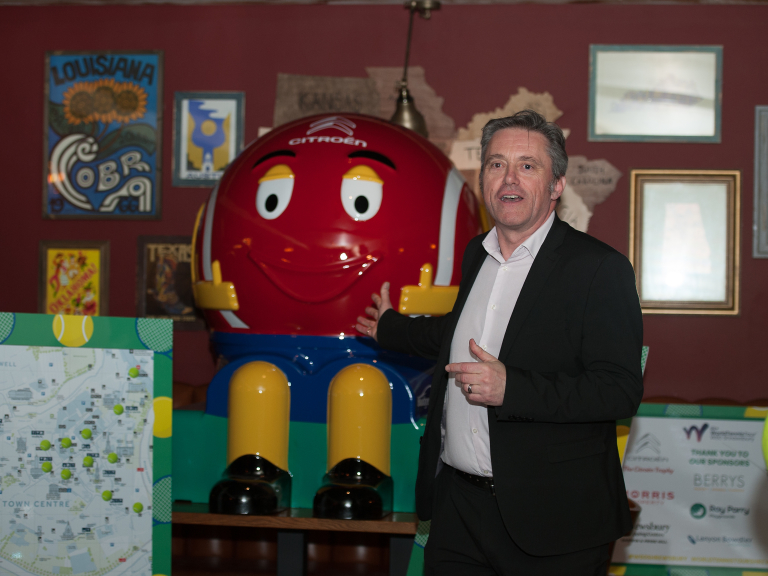 A family tennis ball trail is being served up in Shrewsbury to countdown to the return of top international tennis to the town.

Trailblazers are invited to discover 12 caricatures of colourful four foot high tennis balls - painted by students from Shrewsbury - at key locations dotted throughout the town centre from February 17 to net themselves a prize.

The Shrewsbury Tennis Ball Trail runs until April 19 as part of the Budgen Motors World Tennis Tour event at The Shrewsbury Club.

The $60,000 tournament, part of the International Tennis Federation’s world tennis calendar, is, outside of the grass court season, the biggest event in women’s tennis in the UK in 2020. Leading players will compete to lift the Citroen Trophy.

The trail, supported by the Shrewsbury BID team, was officially launched earlier this week at Hickory’s Smokehouse.

Dave Courteen, The Shrewsbury Club’s managing director, said: “The town has really come together for the tennis trail, a unique, fun activity which is ideal for all the family to take part in on foot around the town centre.

"A local company, Darwin Composites, has made the 12 balls, eight of which have been painted by students from Shrewsbury College. We are delighted that local sponsors associated with Shrewsbury have come on board to help make the event a reality.

“People just need to find the location of the 12 tennis balls, write down the keyword on the back of each of them, and then submit their entries to have a chance of winning lots of great prizes. Entry is free and forms with a map of the trail can be downloaded from the tournament website and also collected from the Visitor Information Centre at Shrewsbury Museum & Art Gallery.

“We are really excited to be hosting the World Tennis Tour tournament and celebrating the return of world class tennis to Shrewsbury. The trail is another way of encouraging people to play tennis, which is such a great sport."

Prizes include three-month family memberships to The Shrewsbury Club, four tickets to attend a VIP lunch and finals day at the World Tennis Tour W60 at The Shrewsbury Club on April 5, and two tickets to enjoy a day’s play at the Fever-Tree Championships, a men’s tennis event held just before Wimbledon, at London’s Queen’s Club in June.

Seb Slater, executive director of Shrewsbury BID, said: "Major sporting events like this are brilliant for raising the profile of Shrewsbury, and we are delighted to support The Shrewsbury Club extending the tennis festival into the town centre with this trail.

"We would encourage people to pick up the booklet in shops and venues in the town centre so they can join in with the trail. You can also get involved by sharing your pictures on social media and spreading the word about the event."

To find out more about the World Tennis Tour tournament, including how to buy tickets, which are now on sale, visit www.worldtennistourshrewsbury.com