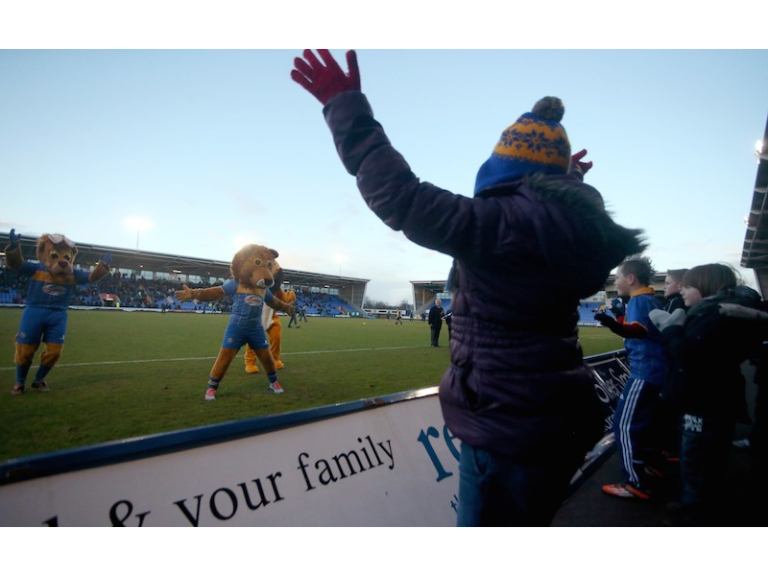 Shrewsbury Town Football Club showed their support for the Get Shrewsbury Active campaign by hosting a fun version of the Shrewsbury Shake at half time during last weekend's match against Hartlepool.

The campaign, being run by The Shrewsbury Club in association with Hope House Children’s Hospice, is aimed at encouraging Shrewsbury residents to lead healthier lifestyles with people invited to make their own personal fitness pledge.
Local businesses also have the opportunity to get involved by filming Shrewsbury Shake videos based on the internet sensation, The Harlem Shake, with a prize fund worth £2,000 in place for the best entries submitted.
A Greenhous Meadow version of the Shrewsbury Shake was filmed in front of the family enclosure in the Roland Wycherley Stand last weekend with Town's own larger than life mascot Lenny the Lion leading the way.
The video will now be sent to local primary schools by Shrewsbury Town's Community Sports Trust as a Wake and Shake exercise video designed to increase participation in daily physical activity for youngsters.
Jamie Edwards, the club's community development manager, said: “We are very happy to be involved in the Get Shrewsbury Active campaign. It was great to work with The Shrewsbury Club and 7 video when making the video at Saturday's game.
"We hope that many local primary schools will take advantage of this free resource and pledge to get active in 2015."
Micky Mellon, the Town manager, has also added his support to the Get Shrewsbury Active campaign and visited The Shrewsbury Club to make his own fitness pledge.
He said: "It's good for you to get moving and if I can publicise things and get myself going, if it helps anybody else to get going and let's everyone know there's a fantastic facility at The Shrewsbury Club available to people then it's very positive.
"I think there's enough people telling us now that in order to have a healthy and happy life it helps to be fit. If you find something that you enjoy doing then all the better.
"I hope along with myself that a lot of people will join me in getting a lot healthier, get moving and enjoy getting fitter."
Mark Reynolds, regional manager for Mosaic Spa and Health Clubs, the owners of The Shrewsbury Club, said he was delighted that the League Two promotion-chasers are supporting the Get Shrewsbury Active campaign.
He said: "We are thrilled to be working with Shrewsbury Town. The Wake and Shake is a fantastic initiative to get the kids of Shropshire more active and the support the club has given Get Shrewsbury Active has been fantastic."
Everyone who makes a personal fitness pledge will receive a free goodie bag which include a campaign t-shirt and water bottle plus an invitation to join a number of free ‘Super Saturday’ fitness events held around the town.
Mark added: "Whether people want to tone up, lose a few inches, run a marathon or simply improve their eating habits, registering with the campaign couldn’t be easier and it’s absolutely free.
"The campaign will be open to anyone and you do not need to be a member of The Shrewsbury Club to take part."
Local MP Daniel Kawczynski and the Mayor of Shrewsbury, Councillor Beverley Baker, have both also expressed their support for the campaign.
The next free 'Super Saturday' event is a walk up Haughmond Hill on Saturday from 9.30am. Organisers say it will be an ideal activity for families and people just starting out to increase their activity.
To find out more about the Get Shrewsbury Active campaign and to sign up, visit www.theshrewsburyclub.co.uk/getactive/
More