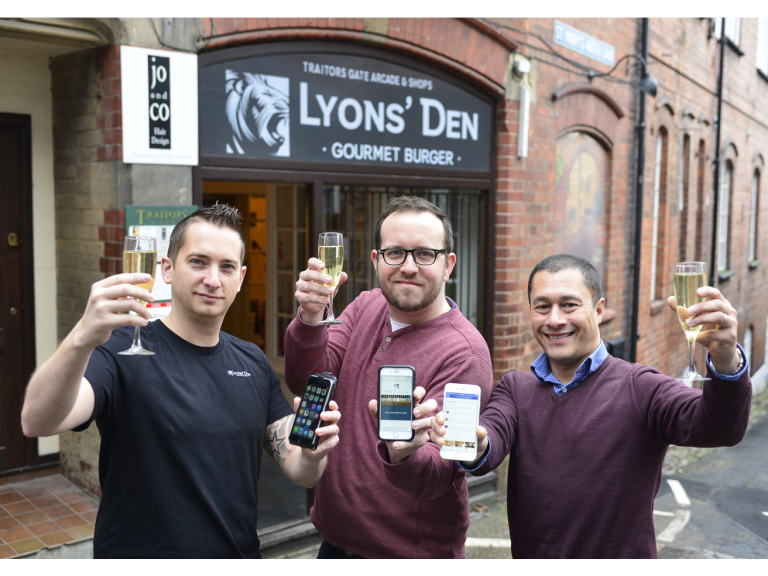 An entrepreneurial Shropshire restaurant owner has praised the quality and diversity of suppliers in the county after his new venture has got off to an ‘amazing’ start.

The restaurant, which has created 12 full and part-time jobs, specialises in gourmet burgers and made-to-order milkshakes using produce sourced totally from within Shropshire. Support included a new website and marketing plan by Shrewsbury-based companies Salop Creative and Key 3 Media, both based on the town’s Business Park.

Joel Stone, of Salop Creative, said: “Shrewsbury has become a real ‘foodie’ town and we are delighted to be involved in the on-going success of Lyon’s Den by creating a bespoke website, signage and a continuing marketing campaign.”

Andy Rao, of Key 3 Media, continued: “The gourmet burger restaurant, the first of its kind in town, has received a fantastic 4.9 out of 5 positive comments on social media which is really exceptional and credit must go to Adam and his team for their skills and efforts in maintaining such high standards of food and service.”

Adam said that he and Kelly, who have three children, were putting a British spin on a classic American dish with the Lyons’ Den restaurant.

“Everything is homemade here and we only use fresh, locally-sourced ingredients as Shropshire has so many great food and drink producers and we cannot praise the quality and service of these suppliers enough as we believe this has contributed greatly to the success of our venture.”

The couple have ambitious plans to take the Lyons’ Den brand nationwide and due to demand will now be opening on Sundays to cater for families looking for a change from the traditional roast dinner.

Further details can be found at: