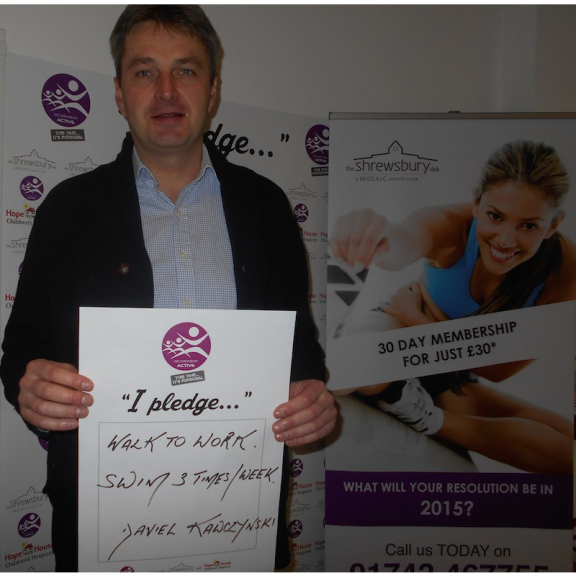 Daniel Kawczynski, the MP for Shrewsbury and Atcham, has pledged to walk to work at the House of Commons each day and swim three times a week after signing up for the Get Shrewsbury Active campaign.

Mr Kawczynski was keen to throw his support behind the two-month campaign run by The Shrewsbury Club, on Sundorne Road, to encourage local people to lead healthier lifestyles.
Shrewsbury residents are invited to make a personal fitness pledge while local businesses have the opportunity to also get involved by filming fun Shrewsbury Shake videos based on the internet sensation, The Harlem Shake, with a prize fund worth £2,000 in place for the best submitted.
Mr Kawczynski said: "You only have to see the number of people who use The Shrewsbury Club to see how popular being healthy is and the importance that many local Salopians attach to keeping fit.
"I've decided I'm going to walk to work daily when I'm in London, from where I live to the House of Commons, which is about a 25 minute walk each way. I normally get the Tube but I have found in the past that the routine of actually walking to work is good for a bit of weight loss.
"I'm not drinking any alcohol now until the general election which is May 7 so that's very important and I'm also going to be swimming three times a week.
"From a sporting perspective what I enjoy most is swimming. You have to find an activity you actually enjoy and I love swimming."
The Mayor of Shrewsbury, Councillor Beverley Baker, is also backing the campaign. She will make her pledge ahead of the Shrewsbury Park Run at The Quarry this Saturday before walking the 5km course.
The mayor also plans take part in a family walk at Haughmond Hill the following Saturday morning, another of the 'Super Saturday' events being held each weekend around the town during the campaign.
Mark Reynolds, regional manager for Mosaic Spa and Health Clubs, the owners of The Shrewsbury Club, said they hope the drive for local people to lead healthier lifestyles will prove popular.
"This year the campaign, run in association with Hope House Children’s Hospice, is going to be more personal with the focus on people's personal reasons for wanting to get active in 2015," he added.
"Whether they want to tone up, lose a few inches, run a marathon or simply improve their eating habits, registering with the campaign couldn’t be easier and it’s absolutely free.
"The campaign will be open to anyone and you do not need to be a member of The Shrewsbury Club to take part.
"Everyone who registers with the campaign will enjoy a number of benefits including a free pledge poster to record their fitness goal for 2015.
"They will also receive a free fitness goodie bag which include a campaign t-shirt and water bottle plus an invitation to join our free ‘Super Saturday’ fitness events held around the town.
"There is also the opportunity for people taking part to use The Shrewsbury Club for 30 days for a special rate of just £30 to help them on their way to achieving their goal."
To register to take part in this year's Get Shrewsbury Active, visit www.theshrewsburyclub.co.uk/getactive/ and everyone who signs up will be emailed a pledge poster.
Mr Reynolds said: "The idea is for people to post their photo to our Get Shrewsbury Active Facebook page and they will gain access to information and tips on activity and healthy eating for free until the end of February.
"We know by making their pledge personal and by telling family and friends that it means the people taking part are more likely to achieve their goals."
More