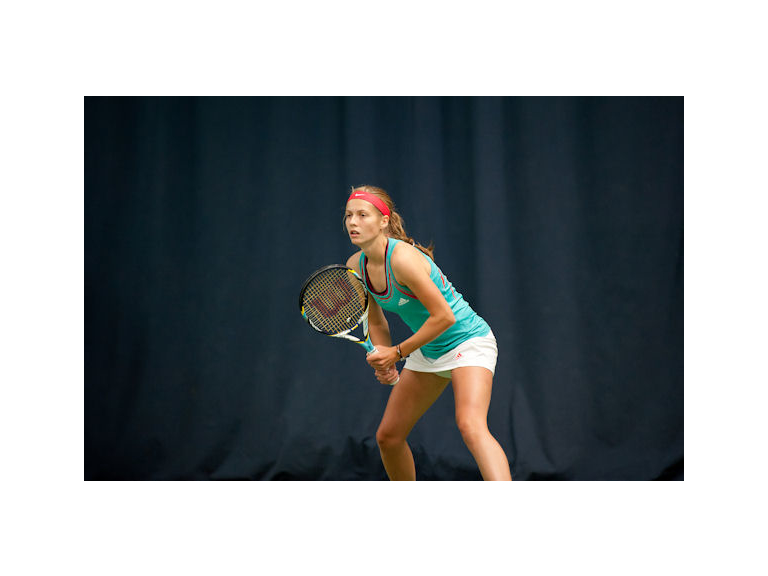 Lauren McMinn is ready to reap the rewards of The Shrewsbury Club taking a more hands on approach towards her quest to climb the world tennis rankings.

Lauren, who turns 21 in July, is currently ranked 1,223 and determined to make further progress.

She now feels better equipped to do just that after coaches at The Shrewsbury Club, where she spends most of her time training, stepped forward to offer extra support.

Nigel Hunter, Director of Tennis at The Shrewsbury Club, said it was a difficult task for a young player to develop their professional career given the difficulty in striking a balance between training and putting together a viable schedule of tournaments.

This is where he and several of his colleagues will offer their guidance as mentors in helping Shrewsbury-based Lauren who is coached by Slovakian Jaro Novak.

Nigel added: "Lauren's been doing a good job but the question is how much of her focus is on the logistical side and some of the other bits and pieces rather than just knuckling down and training.

"If you compare it to Andy Murray and the world's top players, all they have to focus and concentrate on are training and the tennis side. The rest of it is all taken care of.

"We're just trying to support some of that process and we just want Lauren to have a higher percentage of her focus on her tennis and her training.

"Lauren came through the club programme and has played here for years as a junior. She's advanced through the Academy and now she's playing full time. It's her chosen career and she's been playing international tournaments and doing really well.

"But there comes a point where it's tough, travelling around, playing in different tournaments, and I feel Lauren had got to a point where she wasn't sure what was next.

"She's done really well to get as far as she has but it's always about deciding what's the next step. As a club, it's been nice that we can sit down and discuss as a coaching team how we can help.

"We can do some mentoring, help with tournament planning and travel, and also try and gain sponsorship to fund what she has to do."

Lauren, a former pupil at Shrewsbury's Prestfelde School and Concord College, insisted she was grateful for the additional support she will now receive.

"It's brilliant for me and it gives me chance to get myself set up on the tour and get the training and the tournaments in," she said. "At the moment it's sometimes a struggle to manage to correlate both together.

"It's tricky to do that on your own as you're trying to arrange coaching, fitness, tournaments, and you've got to make it all work together. Injuries then come up and it can he hard. To have some help is fantastic."

Lauren's profile soared locally last September when she made the most of home advantage to battle her way through qualifying to reach the first round of the Aegon GB Pro-Series at The Shrewsbury Club.

The highlight was a shock win over Swedish player Malin Ulvefeldt, ranked in the world's top 650, which earned her a world ranking for the first time.

This year has been mixed so far but there's plenty of time for Lauren to achieve her immediate ambition of breaking into the world's top 750.

She added: "It's very up and down at the moment but it's on the way back up again which is good.

"I went through a bad patch at the start of the term but I've recently lost a couple of matches in tight three sets to girls ranked around 500. I just need to get some good draws and hopefully the ranking points will start coming again.

"I'm looking at playing in a tournament in Croatia in a couple of weeks."