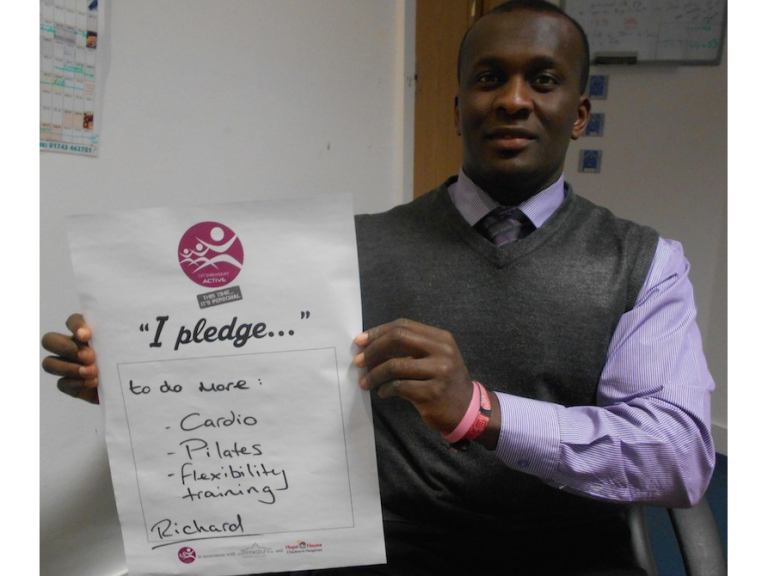 The quest to make Shrewsbury one of the healthiest towns in the UK has returned - with an invitation for local companies to get involved via a fun Shrewsbury Shake challenge.

Bosses at The Shrewsbury Club on Sundorne Road were so pleased with the response to last year's opening Get Shrewsbury Active campaign for which they won a Mayor's Award that they have decided to run the exciting fitness-driven initiative once again throughout January and February.
Local people are invited to sign up and make their fitness pledge while Shrewsbury companies are also urged to take part by uploading videos of their staff having a go at the Shrewsbury Shake based on the Harlem Shake which became an internet sensation.
Mark Reynolds, regional manager for Mosaic Spa and Health Clubs, the owners of The Shrewsbury Club, said: "Get Shrewsbury Active is again aimed at individuals keen to lead a healthier lifestyle but this year we thought it would be fun to also invite local businesses to get involved.
"This is an enjoyable way for companies to encourage their employees to get more active which can only help them become more productive as healthier staff means less days off lost owing to illness and it also makes for a happier work force.
"We know how popular Harlem Shake videos have become so we thought it would be nice to localise it with the Shrewsbury Shake and tie it in with the Get Shrewsbury Active campaign.
"Businesses are invited to enter a short video in the style of the Harlem Shake and all the details of how to enter are available on our Get Shrewsbury Active Facebook page where you will also be able to see the other entrants.
"There is a £2,000 prize fund for the best video submitted during the campaign which will comprise of memberships, spa days, meeting room hire as well as the chance of a company's services being promoted to our entire membership.
"Hopefully local companies will encourage their employees to sign up and make their fitness pledge while at the same time they can also have lots of fun doing their Shrewsbury Shake videos - the crazier the dances and more outrageous the outfits the better!"
Mr Reynolds added staff at The Shrewsbury Club were passionate about the Get Active campaign and they hope this year's drive for local people to lead healthier lifestyles will prove even more popular.
"Last year's campaign encouraged local people to lead a healthier lifestyle and concentrated on the government directive that people should engage in 150 minutes of activity each week," he said.
"This year the campaign is going to be more personal with the focus on people's personal reasons for wanting to get active in 2015.
"Whether they want to tone up, lose a few inches, run a marathon or simply improve their eating habits, registering with the campaign couldn’t be easier and it’s absolutely free.
"The campaign will be open to anyone and you do not need to be a member of The Shrewsbury Club to take part.
"Everyone who registers with the campaign will enjoy a number of benefits including a free pledge poster to record their fitness goal for 2015.
"They will also receive a free fitness goodie bag which include a campaign t-shirt and water bottle plus an invitation to join our free ‘Super Saturday’ fitness events held around the town, the likes of park runs and riverside walks.
"There is also the opportunity for people taking part to to use The Shrewsbury Club for 30 days for a special rate of just £30 to help them on their way to achieving their goal."
To register to take part in this year's Get Shrewsbury Active, visit www.theshrewsburyclub.co.uk/getactive/ and everyone who signs up will be emailed a pledge poster.
Mr Reynolds added: "The idea is for people to post their photo to our Get Shrewsbury Active Facebook page and they will gain access to information and tips on activity and healthy eating for free until the end of February.
"We know by making their pledge personal and by telling family and friends that it means the people taking part are more likely to achieve their goals.
"Give it a try and you never know - your friends and  family may choose to make the pledge themselves.
"This community event is not just for January and February as we want people to stay active throughout 2015.
"The campaign is in association with Hope House Children’s Hospice who have active events throughout the year which people can also take part in."
More