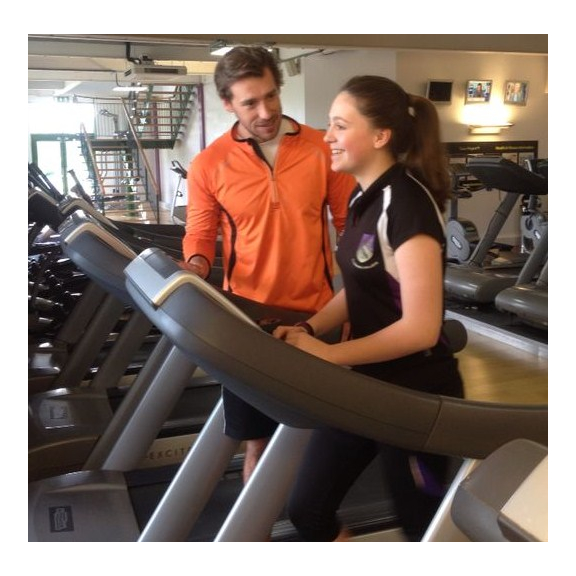 A talented Shrewsbury athlete has emerged as a rising star in the competitive world of modern pentathlon.
Gifted Shannon Davies, 14, has made great strides over the past 12 months and has now been invited to trials for the English Talent Programme.
Her achievements are all the more impressive as Shannon, a pupil at Ellesmere College, has Asperger's Syndrome, a form of Autism.
Karen Davies, Shannon's proud mum, is delighted by her daughter's sporting prowess and paid tribute to her personal trainer Darren Ruff, lead strength and conditioning coach at The Shrewsbury Club, for his contribution to the teenager's success story.
Karen said: "Darren has known Shannon since she was five when we first became members of The Shrewsbury Club and he's been absolutely fantastic with her.
"He's really taken her under his wing and what he's done over the past 12 months has been brilliant."
Karen stressed Shannon has become much more focused and confident since starting to make an impact in regional and national competitions.
She added: "For any parent that hears their child has autism, they automatically panic, but this just proves that autism shouldn’t hold children back from doing what they want and achieving their goals."
Shannon has always been a strong swimmer but her talents in other areas have really come to prominence with the encouragement of Darren and also her school with Shannon a popular member of the Ellesmere College Modern Pentathlon Club.
She makes use of the impressive facilities on offer at The Shrewsbury Club to train up to four times a week during school holidays.
Darren, Shannon's personal trainer, said: "I've been working with Shannon for the past 12 months and the progress she's made has been remarkable. It's a great testament to her attitude and dedication to her sport.
"Shannon is one of those lucky people who has a natural fitness ability. We have stripped back her training and really focused on her form and her race pace to take into a number of the high class events which she now regularly competes in to great success.
"We are currently re-structuring Shannon's programme based around her racing schedule and performance times required devised through Pentathlon GB to further her amazing progress. She is performing and perfecting this weekly, either on her own or with my guidance."
Shannon initially started to train in modern triathlon, which comprises running, swimming and pistol shooting, just over a year ago.
After entering her first competition almost as an experiment, her talent quickly became clear as she finished fifth and was swiftly entered into a national event.
She was recently crowned West Midlands champion for her age group in the modern triathlon and performed well in the national championships in Birmingham last weekend.
Shannon also had the huge thrill of competing at London's Olympic Park in the British Schools Biathlon Championship last month, helping her Ellesmere College team finish fifth in front of a host of star names, among them Olympic diving medallist Tom Daly.
Such has been Shannon's development in fencing, she has been entered into the National Tetrathlon in Birmingham while she also regularly competes in specialised pistol shooting competitions.
They are the two disciplines which make up the modern pentathlon along with running, swimming and show jumping, with Shannon's promise now recognised further afield by being invited for trials for the English Modern Pentathlon Talent Programme.
"The fact Shannon can do four sports to such a high standard, and is progessing well in the fifth element which is show jumping is almost unbelievable," added mum Karen. "She takes each day at a time but she has her goals to drive her on."
More