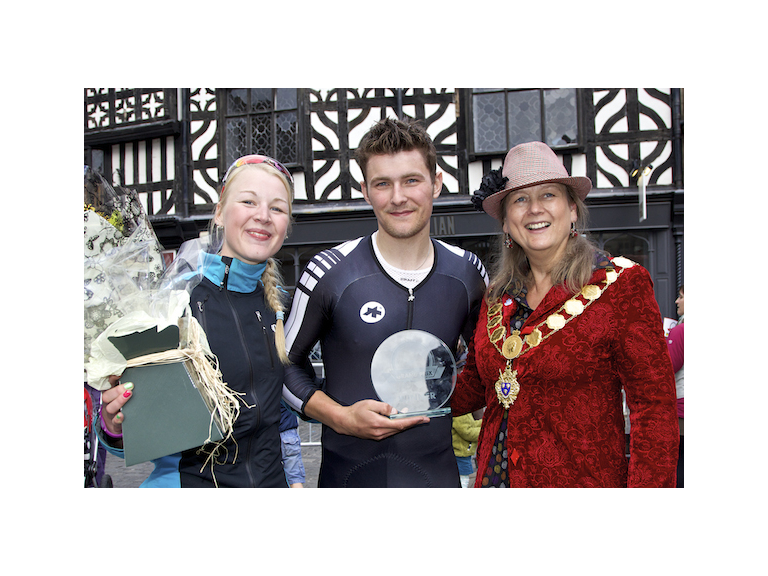 Thousands of people descended on Shrewsbury on Sunday (May 25th) to watch the first major cycling race to be held in the town for decades.

It was the first professional cycling race to be held in the town for 20 years and today organisers hailed the event an overwhelming success.

Race organiser Ben Lawrence, managing director of Beaumont Lawrence, said: “It has been a really fantastic day. The quality of racing was superb and despite the forecast for showers the rain held off and the event has been a huge success.

“We know there has been a lot of preparation for today and the races were tight, fast and technical.

“We wanted this event to put Shrewsbury and Shropshire on the cycling map and it has certainly done that.”

The race action kicked off from The Square with a women’s only race.

This saw British champion Ms Rowsell take to the streets along with 34 other female riders including Shrewsbury rider Hayley Edwards, a cyclist riding for British Cycling Elite team - Starley Primal Pro Cycling Team, to battle it out for the top podium positions.

After a thrilling 45 minutes of fast paced cycling which took riders along High Street, Shoplatch, St Johns Hill, Cross Hill, Swan Hill, College Hill, Princess Street, Milk Street and then back on to the High Street, it was 20-year-old Brit Tate, from Ilkley, West Yorkshire, that emerged victorious.

The young rider, of team GB Cycles, has been cycling for three years.

She said: “It is absolutely amazing to have won. I felt like I was riding in the Olympics on the last lap. The crowd were so supportive. I have never won anything like this before. I’m completely speechless. To have won against such a talented group of riders including Joanna Rowsell is fantastic,  I’m just so pleased.”

The second and third finishers were just a fraction of a second behind the leader with Harriet Owen, of Matrix Fitness, finishing in second Lydia Gurley, of Merlin Cycles, in third.

Twenty-five-year old British team pursuit champion Ms Rowsell finished in fourth after leading for most of the race.

The final race of the day was the fast and furious professional race which attracted 49 riders from across the UK.

The hour-long action packed race thrilled crowds with riders reaching speeds of up to 40 mph as they raced around the cobbled streets of Shrewsbury.

It proved a fast and furious race and after a tight sprint to the finish it was independent rider Robert Watson, of Ilkley, West Yorkshire, that crossed the finish line first.

He was followed by James Notley, of Mammoth Lifestyle Racing, in second position and George Moore, of Bicicielo, in third.

He also revealed that Brit Tate, winner of the female race, was his girlfriend of nearly two years.

He said: “It is the first time I have been to Shrewsbury. When I came and saw the cobbles and tight corners I thought the circuit would suit me down to the ground and I decided I was just going to go for it. I will definitely be back next year to defend my title.”

Mr Lawrence, who praised Shropshire County Council for helping to make the event happen, added: “All the races were fantastic to watch and to have Olympic gold medalist Joanna Rowsell compete was such an honour. The professional race was a real crowd pleaser with riders reaching top notch speeds. It was a very fast and exciting race.

“We would like to congratulate all the winners and thank all involved, especially the sponsors - Beaumont Lawrence, Stan’s Cycles, Cooper Green Pooks and Pure Communications - that have shown their support for Shrewsbury and cycling and helped make this a hugely successful inaugural event.”

As well as the cycle races spectators at the Shrewsbury Grand Prix were also able to enjoy a packed programme of family events set up in conjunction with Cycle Shrewsbury.