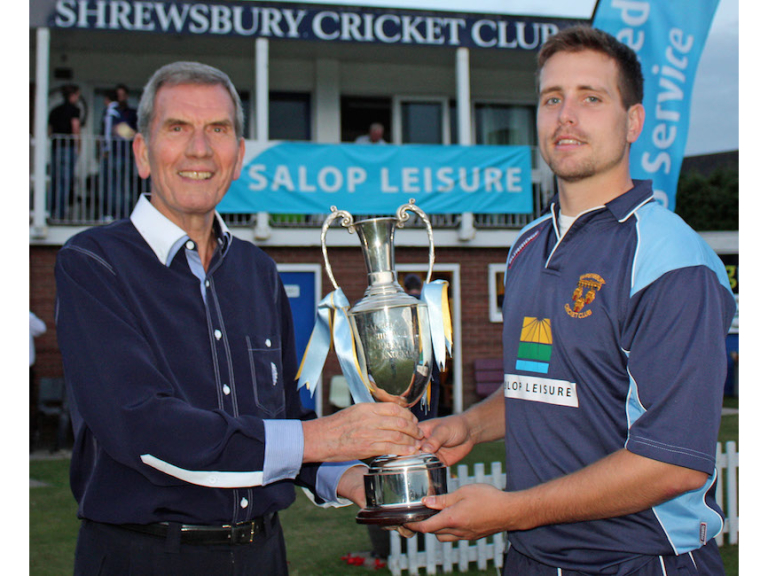 In a sensational end to a match that Shrewsbury looked like winning with ease, the hosts needed two runs off the last ball, via a thick outside edge, to finally secure victory after an amazing fight back by the holders.

The writing looked to be on the wall for Oswestry when they were bowled out for just 117 in their last over as Peter Holloway (24) and Elliott Bowen (19) top scored. Tim Dean (4-16) and Henry Blofeld (3-23) did the damage for the Shrewsbury bowling attack.

In reply, Shrewsbury coasted to 89 for one after 11 overs before an astonishing collapse saw them needing two runs off the last ball with three wickets in hand. Openers Australia Jehan Bilimoria (40) and Anthony Parker (31) gave Shrewsbury a solid start and Ed Foster contributed 19 before Tim Dean, with an unbeaten 11, literally edged his team home in in a tension-packed climax.

Oswestry again relied on their spin attack, which was led by Robbie Clarke (2-26).

Afterwards, a relieved Ed Foster said: "For the neutral it must have been fantastic to watch, but for each team I’m sure the emotions swayed drastically throughout the match - they certainly did for us!

“It goes to show why Twenty20 cricket is so popular with the final going to the very last ball. We should have had it in the bag but credit to Oswestry for fighting back and taking it to the wire."

Mike Robinson, Oswestry’s chairman, said: “We are disappointed not to have retained the trophy but it was a terrific game of cricket with a thrilling climax.”

In the semi-finals last month, Shrewsbury beat Shifnal and Oswestry beat Bridgnorth. All three ties were played on a Friday evening.

Tony Bywater, chairman of competition sponsor, Salop Leisure, congratulated both teams on an exciting final and said he hoped this year’s competition had introduced several new spectators to cricket in Shrewsbury.

As part of their sponsorship package, the award-winning caravan dealership agreed to pay for one free drink for season ticket holders at Shrewsbury Town Football Club and those wearing the club’s football shirt who turned up to watch the T20 cricket matches. The move was designed to encourage more football fans to watch Shrewsbury Cricket Club.