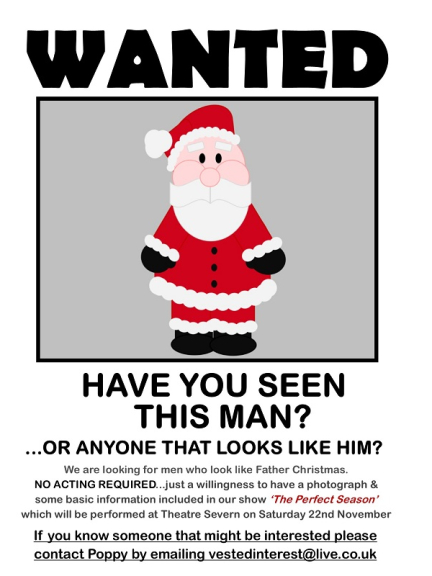 A local theatre company are seeking out Father Christmas look-a-likes this autumn to feature in their festive production, ‘The Perfect Season’ at Theatre Severn.

Vested Interest, who set up residence at Shrewsbury College in 2013, work with Performing Arts and Music students on a number of projects throughout the year.

Writer and director Vicki Duckett is keen to reassure candidates that there is no acting required. She said: “Without giving too much away we are looking to include a photograph and basic information on a number of men that will be incorporated in a scene called ‘Possible Suspects.”

As a company, Vested Interest would prefer to use men from Shrewsbury and the surrounding area as they like to feature local people and places as inspiration.

Can you help them? Do you know someone that looks like they could be Father Christmas? You could nominate yourself or someone you think fits the bill. Maybe it's just the length of their beard, the jolliness of their chuckle or their love of mince pies that makes them a potential suspect.

Vested Interest would be excited to hear from you. Email Poppy, Assistant Producer, at vestedinterested@live.co.uk or call 07535 510805.

‘The Perfect Season’ will be performed in The Walker Theatre at Theatre Severn on Saturday 22nd November.

For more information on Performing Arts and Music courses at Shrewsbury College, please call Course Advice on 01743 342411 or visit www.shrewsbury.ac.uk