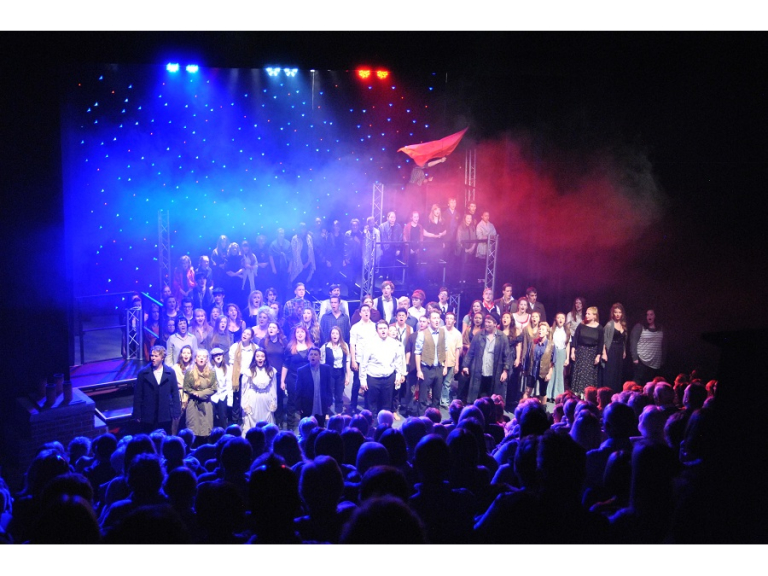 Performing Arts students from Shrewsbury College, dazzled audiences during their two-night sell-out production of ‘A Night at the Musicals’ at Theatre Severn.

With a cast of over 100 and ensembles from eight of the most popular and much loved musicals, the show delivered on its promise to offer a spectacular night to remember - both nights ended with a standing ovation from the crowd.

Michael Jenkins, the director of the show and Performing Arts lecturer at the College, said "This type of performance was a first for us, using a simple but effective narrative to link the musical numbers together really worked and allowed non-musical theatre fans to get into the spirit - the students excelled themselves and showcased their talent throughout.”

Music Technology students also had a vital part to play in the production as well as Technical Theatre Apprentice, Lucy Barnett, who worked alongside the tech team at Theatre Severn and students Ed Brown and Lorna Lennon, to run operations backstage.

Gina Evans, Performing Arts lecturer at the College, said: “This really was a result of a combined effort of hard workers, from the actors to the musicians and the technical theatre support. We would like to thank the Theatre Severn Technicians who were very supportive with our students who were learning on the job and ensured that we created a visually enthralling show.

“We are so proud of our student’s performance, it was a fantastic experience for them and the reactions from the crowd were priceless.”

Theatre-goers took to social media to express their delight with the show, describing the night as, “brilliant, absolutely brilliant,” “outstanding” and “a wonderful evening out.”

Audiences also got a taster of the upcoming summer production of Guys and Dolls, which will take place at Theatre Severn on Tuesday, 16, Wednesday, 17 and Thursday, 18 June at 7.30pm. Tickets cost £12 (adult) £8 (child). For more information or to book tickets please call Theatre Severn on 0174 281281 or visit www.theatresevern.co.uk