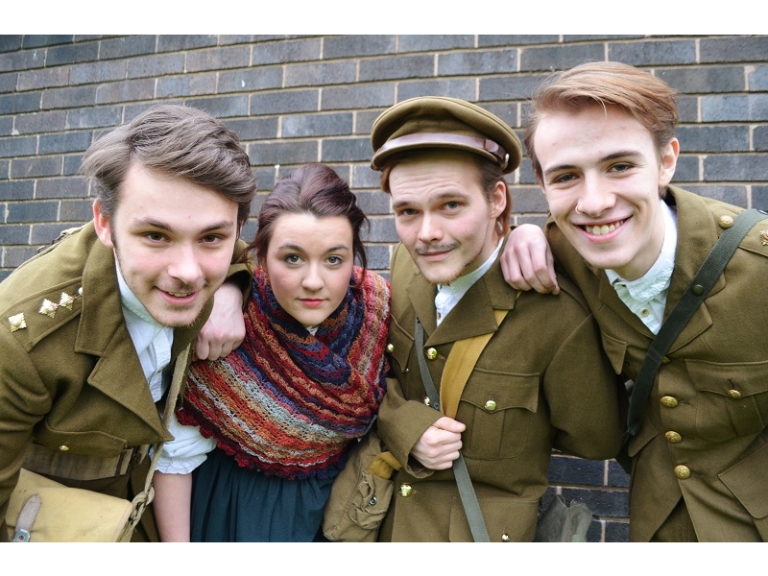 Performing Arts students at Shrewsbury College have made it through to the finals of the Pride of Shropshire 2014 awards for their work on a commemorative World War One play.

The Year One and Two BTEC Higher National Diploma students were nominated for the Youth Community Award in the Pride of Shropshire Campaign, promoted by the Shropshire Star, and have been told the judges have selected them as finalists.

Two representatives from the College have been invited to the awards evening on July 14 at Shrewsbury Town Football Club where they hope to receive an award.

The students staged a heart-warming adaptation of Peter Whelan's epic play, Accrington Pals, in January, to commemorate the 100th anniversary of World War One.

The critically acclaimed screenplay, which dramatises the lives of ordinary people caught up in the historical events of WWI, possesses significant relevance as this year marks 100 years since the start of the Great War.

Gina Evans, Performing Arts Lecturer at Shrewsbury College, said: ‘’As this year bears particular significance to the war, we thought it would be a good opportunity for our students to focus on something that was not only interesting and challenging, but historically important.

‘’Funny, intimate and moving, The Accrington Pals portrays the terrifying reality hundreds of men faced at the Battle of the Somme in 1916. The student worked very hard on the adaptation and learned a lot about this important historical event in the process. We are thrilled that they have been recognised for an award in this way.”

Year 1 HND Performing Arts student, Kenny Noakes, 19, from Newtown, Powys, said: “I played Ralph, a character that saw signing up to war as an adventure rather than a duty. It was challenging to act out extreme scenarios and emotions I hadn’t previously had to evoke.

‘’What was great about this script, is that it empathises with all those who were affected by the war, including the women left behind.

“The play has a quick, upbeat pace that is refreshing to be a part of and for audiences to watch. Despite its seemingly dark nature, there are plenty of comforting and comical moments.’’