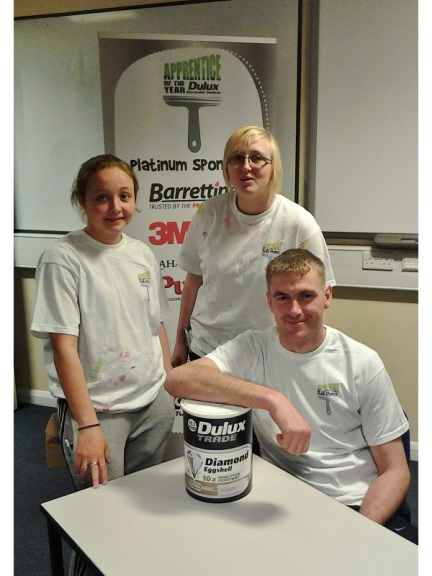 Level 2 Painting & Decorating student and Apprentice from Shrewsbury College has made it to the finals of two national competitions after taking first place at the regional heats.

Painting & Decorating lecturer from the College, Barry Mason said: “We’re really proud of Sam and it’s great that he’s representing the College and heading for the final. The standard was really high and his skills were put fully to the test. This is a great opportunity for our students to showcase their talent and take part in a well-organised and professional competition and I’m looking forward to the final.”

Sam pulled out all of the stops at both competitions and successfully completed practical work pieces which saw him use a range of skill sets, including: wallpapering, stencilling, waterborne glossing and various other special effects.

Sam said: “I’m absolutely delighted to have come first and, although it was challenging, I really enjoyed the opportunity to take part. I’m now focused on the final and even though I know it will be tough, it’s just great to take part.”

Richard Tart, Painting & Decorating Technician at the College said he was extremely proud of all seven of the students from the College who entered the competitions.

“I cannot express just how happy I am with all of our students. The hard work and effort they have put into, not only the competitions, but their day to day work, is something I am extremely proud of. They have all exceeded their own expectations.” he said.

“For some of the students this was their first competition,” he continued. “So to produce work at such a high standard is a credit to them. I look forward to seeing how Sam gets on in the finals.”

Sam received a variety of gifts for winning the heats, including £100 worth of Dulux vouchers, equipment and certificates. At both finals he will have to complete further practical pieces, which will see him push his abilities to the maximum in a bid to be named Dulux Apprentice of the Year 2014 and Johnstones Young Painter of the Year and receive gifts worth thousands of pounds.