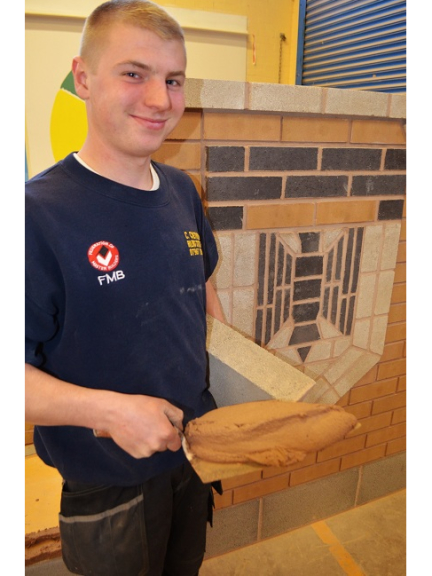 A Shrewsbury College student studying Brickwork has just competed in the SkillBuild National Final and has been selected as one of the top seven bricklayers in the country.

Ryan Stevens, 19, of Shawbirch, Telford, is just completing his NVQ Level 3 Apprenticeship at Shrewsbury College, having started in the 14-16 programme and completed his Levels 1 and 2. Although he didn’t win any prizes when he competed at the NEC SkillBuild National Final in November, judges were so impressed by Ryan’s expertise that he was chosen as a potential candidate to represent the UK at bricklaying after getting a high enough score from the panel.

Following the competition, Ryan has just returned from a trip to Loughborough University where he was selected as one of the top seven bricklayers in the country by the UK World Skills Bricklaying team. Now he has a year of training ahead of him with the squad. Members will take part in competitions throughout the year to test their skills and be eliminated until just three are left.

Ryan, who is completing his Apprenticeship with Craig Chetwood Building Contractors in Wrockwardine, said: “I have to keep working hard for the next year and improving my skills. Three people will be selected at the end of this process as a squad, but only one person will actually go to the competition in Sao Paulo, Brazil to represent the UK in August 2015.

“My employer is giving me time off to attend training sessions. To get to Brazil would mean everything to me. I would be representing the country, which would be an amazing honour and experience, and I think it would really help my career. I don’t think I would be in this position without the help of my tutors Shrewsbury College who have really given me the help I needed to progress so far by this stage in my career.”

Brickwork Lecturer, Steven Thomas, said: “Ryan is a credit to the College. He has worked his way up from NVQ Level 1 to Level 3, found employment, and has excelled in competitions. I am really impressed with the way he has worked, coming up with innovative ideas and improving his skills-set at every level.

“We now invite Ryan into the College to help coach younger students and help them towards competitions. We will be rooting for him as he takes part in tasks over the next year or so with the UK Bricklaying team and we hope he makes it all the way to Brazil.”

For more information about construction skills and trades at Shrewsbury College, please call Course Advice on 01743 342342 or click here.