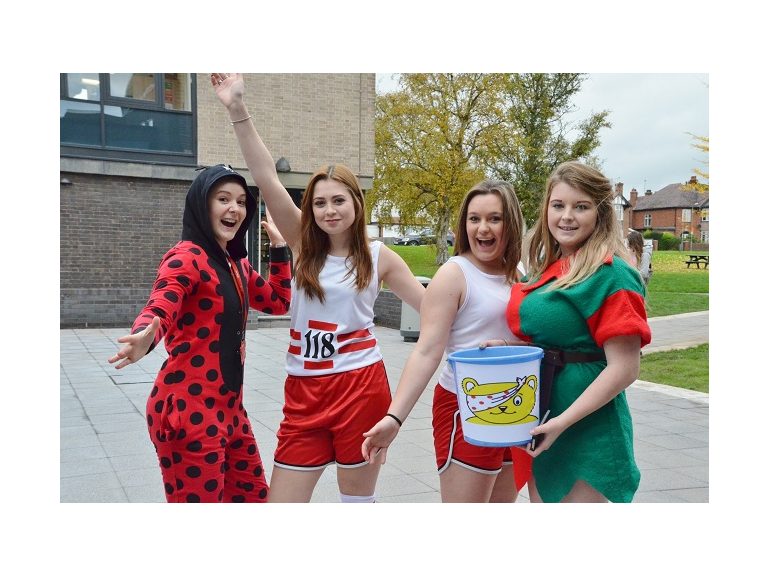 Staff and Students from Shrewsbury College have been busy this term raising thousands of pounds for local and national charities.

A fantastic total of £4411.26 has been raised by the college so far this term – with a few events still to take place.

Since the start of term in September, students from across the College have organised and taken part in multiple fundraising events, including; MacMillan coffee morning, Macmillan curry and quiz night, Wear it Pink: breast cancer awareness day, Remembrance day in aid of Help for Heroes and the Royal British Legion and several events for Children in Need.

The money for Children in Need was raised by students and staff taking part in; cakes sales, pin the money on a Pudsey, hair shaving, a three hour spin-athon, fancy dress Zumba and football matches.

Local company, EPS, which works with the College, also helped with the fundraising efforts by donating 1000 foamex poppies for the Remembrance Day poppy cascade in the courtyard, which was featured on BBC Midlands Today.

Lesley Urquhart, Progressions Specialist at the College, said: “Staff and students across the College have raised a whopping amount of money, more than we ever expected in such a short space of time.

“We are grateful for all of the effort made by students and staff and I’d personally like to say a big thank you to everyone who has organised, participated and donated, to such worthy causes.”

The College will also be taking part in ‘Christmas Jumper day’, in aid of Save the Children UK and raising money by pinning a message bauble on the Christmas tree, instead of sending staff Christmas cards, in aid of Hope House Children’s Hospice.

For more information about courses at Shrewsbury College please call, 01743 342411 or visit www.shrewsbury.ac.uk