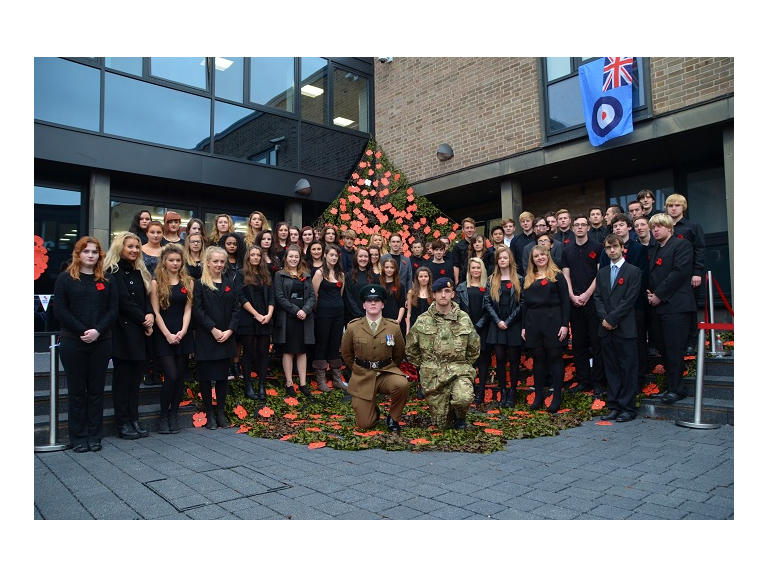 Shrewsbury College staff and students – including those who have served in the armed forces – have been marking the centenary of the start of the First World War, by replicating the poignant poppy display at the Tower of London.

A sea of specially-made foamex poppies cascading out of the college building on an army net, can be seen dominating the college’s courtyard.

The poppies, designed by the College and made by Shropshire–based exhibition and display company EPS Limited, have been pinned to the canopy by staff and students, with donations for each one going to the Royal British Legion and Help for Heroes.

The display, organised by the Yearly Activities Group of students and inspired by the ‘Blood Swept Lands and Seas’ exhibition currently on display at the Tower of London, formed the backdrop to the College’s Remembrance Day Ceremony today.

Phil Castle, Progressions Specialist at the college, who works with the Yearly Activity Group, came up with the idea to emulate the London display at the newly refurbished college courtyard. He said:
“We all wanted to do something extra special to mark the one hundredth year since the start of the First World War. As there is now a big courtyard at the front of the college I thought it would be a good space to put up our own poppy canopy.

Ted Coxon, Commercial Manager at Shrewsbury College, has also been heavily involved in organising this year’s Remembrance ceremony. As an ex-serviceman who spent 24 years in the rifles regiment previous to the light Infantry, Remembrance Day is particularly significant. He said: “I left the army about a year ago, before starting work here at the college. It means a lot to me to mark Remembrance Day and last week I was lucky enough to be able to visit the Tower of London to see the poppy cascade. “

“On a recent tour of Afghanistan I lost 17 friends and colleagues so for me it means a lot to commemorate them. I was more than happy to help Phil and the students organise such a prominent and moving event.”

Dave Sallows, from EPS Limited, who donated the 1000 poppies to the college, said: “It was an absolute pleasure to provide the cut out poppies and to work with Shrewsbury College on this project. It was a chance to test out our new direct print and cut equipment as well as back a cause which is close to the hearts of everyone in the UK.”

The Remembrance Day ceremony, which took place from 10.40am until just after 11am this morning included a choir of 80 students from the Performing Arts department, who set the tone of the service by singing a variety of pertinent hymns. A Bugler from the Army Reserves played Last Post prior to the two minute silence, followed by the Reveille and a reading of the Kohima Epitaph by Ted Coxon, to conclude the service. Wreaths were laid by the Principal, Chairman of the Board of Governors, and a student, and readings were given by various staff members.