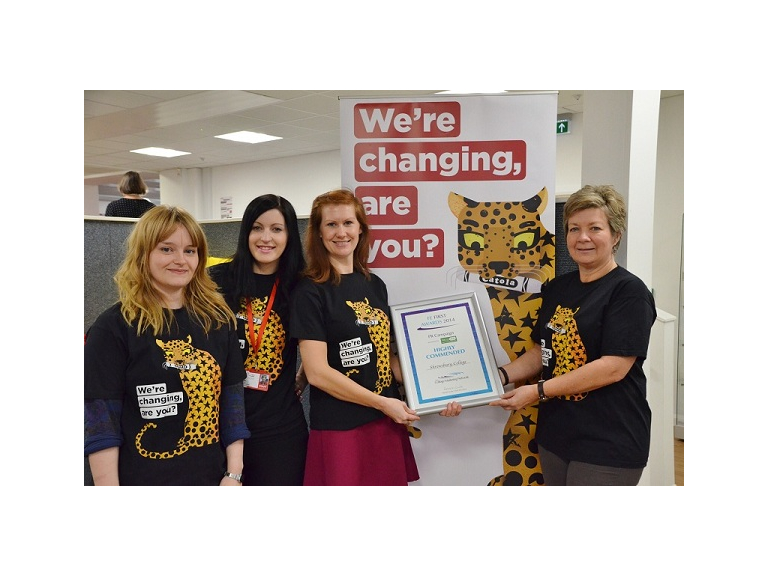 The marketing team at Shrewsbury College is celebrating after scooping a national award in the annual prestigious College Marketing Network Awards.

The team entered the PR Campaign Category and won a Highly Commended Award for its summer ‘We’re Changing, Are You?’ campaign.

The team narrowly missed out on getting a Gold to Manchester College, which won for its Apprenticeship campaign fronted by footballer Rio Ferdinand.

The team at Shrewsbury College chose a number of messages to get across to the public with its campaign, including news of the £15m redevelopment of its London Road Campus, its recent ‘Good grading’ from Ofsted and the fact that you can now mix and match diplomas with A levels and GCSEs.

The campaign ran for several months across many platforms in the run up to the College’s busiest enrolment period in September and helped the College achieve more enrolments than expected.

By the end of September, enrolments were up on last year by 5% overall and 8% for school learners. This was despite the fact there were less school leavers in Shropshire this year.

“We thought about what we wanted the campaign to achieve and it was important that the main underlying message was about how much the College has changed over the last few years, not just physically but also our ethos and what and how we teach courses. The emphasis here is about developing the whole individual and getting them ready for life after College, whether they are doing an Apprenticeship, a vocational diploma or a Higher Education course.”

New graphic designer Mia Tivey developed three animal illustrations to front the three messages, a leopard, a bee and a peacock,  with the overall campaign message being ‘We’re Changing, Are You?’, which asked the end user to consider coming to the College to take a course or learn something to help their lives improve.

Charmian Turner, Marketing and Admissions Team Leader, said: “We are very proud to have won this award. The calibre of entrants among our peers is always exceptionally high and we were up against some very large organisations.

“We enjoyed this campaign and tried some different things and are pleased that everyone’s work paid off, not just with this award, but with a tangible boost to our enrolments.”

The marketing team are now working on a campaign for courses starting in January which involves including pushing adult Apprenticeships, Higher Education courses including HNC in Salon Management and HNDs in Performing Arts and Fashion as well as the usual leisure courses for interest. Look out for the billboards in town and download the new part-time guide from the website www.shrewsbury.ac.uk

For further information on courses at Shrewsbury College, please call 01743 342411 or visit www.shrewsbury.ac.uk