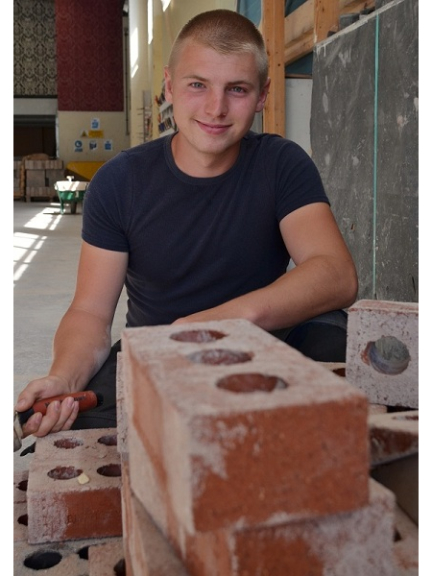 A bricklayer who has just completed his Apprenticeship with Shrewsbury College has battled it out against the best ‘brickies’ in the country to secure a place in the UK squad headed to Brazil.

Ryan Stevens, aged 20, from Shrewsbury, joined 100 of the UK’s most talented apprentices and learners in Northern Ireland during June to compete in three days of tough competitions, to be crowned one of the top three bricklayers in the UK. He has now made it onto the team for WorldSkills Sao Paulo 2015 where he hopes to be crowned the best bricklayer in the world.

Ryan was invited to compete for a place in Squad UK after excelling in the WorldSkills UK National Competitions. He has now been selected, along with two other bricklayers, from Sussex and Barnsley, as a Squad UK team member.

“I really enjoyed the competition in Ireland, however I didn’t anticipate how much pressure there would be,” explained Ryan. “On the bus journey to the event no one spoke to each other because we were all so nervous.

“The finalists were revealed during an ‘Apprentice’ style boardroom scenario. I couldn’t believe I was chosen, the competition was so tight. It was very emotional, and to be honest I’m not sure it’s sunk in even now. My family and friends are thrilled for me and have been extremely supportive.”

Ryan has recently completed his NVQ Level 3 Apprenticeship in Brickwork at Shrewsbury College, having started in the 14-16 programme and completing his Levels 1 and 2. He continues to work for Craig Chetwood Building Contractors in Wrockwardine on a self-employed basis.

“The College and my boss have been extremely supportive of me. I don’t think I would be in this position without the help of my tutors Shrewsbury College who have really given me the help I needed to progress so far by this stage in my career, nor would I be able to take part in the competitions if my employer didn’t allow me the time off to train.”

Brickwork Lecturer, Steven Thomas, from the College, said: “Ryan is a credit to the College. He has worked his way up from NVQ Level 1 to Level 3, found employment, and has excelled in the biggest skills competition in the world.

“We now invite Ryan into the College to help coach younger students and help them train towards competitions. We will continue to support him as he takes part in his training during the run up to Sao Paulo.”

After securing a place in Squad UK, Ryan will now undergo an intense training programme supported by a dedicated Training Manager and Performance Coaches until the Sao Paulo Worldskills final next summer– where over 40 countries compete.

“I’m looking forward to training with the other guys in the team. For the finals we will be given a set time, either 18 or 20 hours, to complete three intricate wall designs, all with which will include obscure patterns. So from now until next August we will spend most of our time focusing on honing our skills.

“The whole experience has given me a huge and much needed confidence boost, and I think now I have made the team I have been spurred on to work even harder during the next few months. To win at the worldskills final in Sao Paulo would mean everything to me. The winner gets to call themselves the best in the world, and the reputation that comes with that is phenomenal.”

WorldSkills Sao Paulo 2015, which takes place from 11-16 August 2015, is the world’s largest international skills competition. The WorldSkills Competition, which is held every two years in cities around the globe, sees around 1000 young people come together to compete for medals in more than 40 skills ranging from Bricklaying to Beauty Therapy and Aircraft Maintenance.
(Insert quote from College / Employer)

Keith Smith, Official Delegate, WorldSkills UK said: “I offer my congratulations to everyone who has been selected to compete in the Squad UK Selection for WorldSkills Sao Paulo 2015 and I wish them the best of luck in their preparations for the Competitions.”

Participating in WorldSkills enables countries to share best practise in Apprenticeships and vocational teaching, raising standards on a global scale. The competitions showcase the high levels of performance that can be achieved by individuals and organisations through quality training, inspiring young people and adults to be ambitious in their pursuit of skills to the highest level.

The Squad and Team UK for WorldSkills is managed by Find a Future.

For more information about Construction courses or Apprenticeships at Shrewsbury College please call 01743 342411 or visit www.shrewsbury.ac.uk