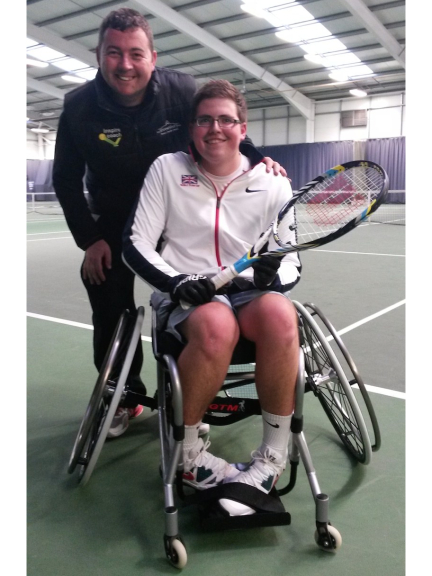 A talented teenage tennis player who trains at The Shrewsbury Club will fly to Turkey later this week after receiving his first international call up from Great Britain.

Josh Cooper has been selected to represent the GB wheelchair tennis squad in the 2015 World Team Cup in Antalya, a prestigious tournament which runs from May 25-31.

It is renowned as the International Tennis Federation's flagship wheelchair tennis team event and Josh, 17, is delighted to be part of it.

"I got an email after I got in from tennis just saying I had been called up to play for Great Britain Juniors," he said. "I'm over the moon to have the chance to represent my country. It's one of the best feelings you could really wish for.

"I go to Turkey on Friday to compete against lots of different countries, the likes of Argentina and Brazil,  and I'm really looking forward to it."

Josh, one of three juniors in the GB squad, caught the eye of the selectors when he recently attended a Ticket to Tokyo Camp targeting potential competitors for the 2020 Olympics in Japan.

He added: "I just want to enjoy it, get a bit of experience, try my best and just do my best, do myself and everyone else proud, and keep battling on."

Josh has been playing at The Shrewsbury Club for the last 18 months under the watchful eye of Nigel Hunter, the club's director of tennis.

The teenager was already a big tennis fan before being confined to a wheelchair at the age of 14 after being diagnosed with dystonia.

"I used to play able bodied for three or four years and just loved playing tennis and football," he said. "I came back from tennis one day and was telling my mum I had this dreadful pain in my feet.

"I then had many tests and was diagnosed with dystonia, which is a muscle disorder which affects my legs. I could walk with crutches but things got worse so I just stick to a wheelchair now."

Josh plays tennis up to four times a week and is thrilled his talent has now been rewarded with international recognition.

"I'm very chuffed," he added. "I just love playing tennis. It gives me some independence back and just makes me feel happy.

"I enjoy playing at The Shrewsbury Club as it's really friendly. The atmosphere is geat. There's lots of courts and the people I play with at the club are very nice and offer to help me in any way I can."