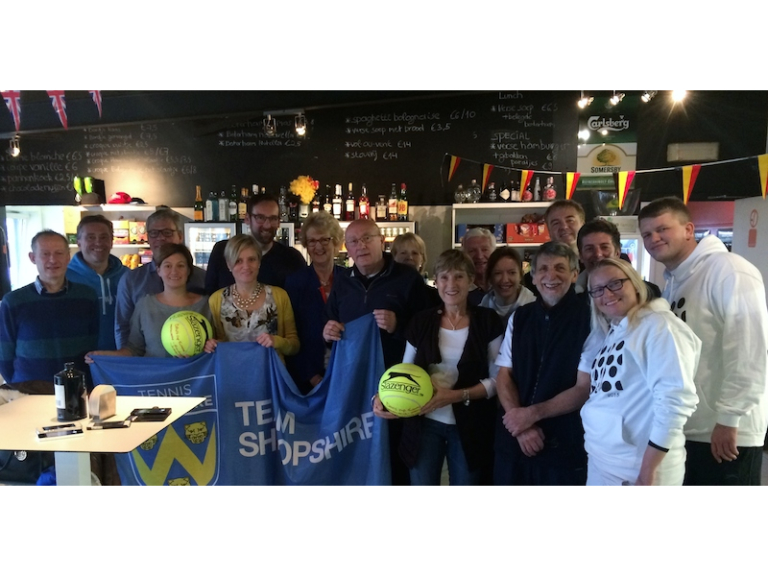 Excited members from The Shrewsbury Club enjoyed the thrill of a memorable Davis Cup weekend in Belgium as they cheered Great Britain to a famous victory - while also having the chance to take to the tennis court to face Belgian opposition.

Four club members, including former Shrewsbury Town manager Alan Durban, plus the club's managing director Dave Courteen were delighted to accept an invitation from the Lawn Tennis Association to spend the weekend in Ghent.

They were able to sample the atmosphere as Andy Murray's brilliance ensured Team GB got the better of hosts Belgium to lift the Davis Cup for the first time since 1936.

Dave was lucky enough to have a seat at the Flanders Expo for the historic moment that Murray beat David Goffin while the rest of the party from The Shrewsbury Club, which also featured Jane Hampton, Dave Halliday and Geoff Norton, were among the crowd on Saturday afternoon when the Murray brothers, Andy and Jamie, won their doubles match.

"It was just an amazing weekend," said Dave. "The LTA invited a couple of clubs they have been involved with, in our case through hosting the Aegon GB Pro-Series tournaments, to travel over to Belgium and be part of a truly special weekend.

"Ourselves and members from Surbiton Tennis Club in Surrey were paired up with Merelbeke Tennis Club, from the Ghent suburbs, and they proved to be excellent hosts.

"Our members stayed with host families in Ghent, we were given a guided tour of the city, while we all went to watch the doubles at the Flanders Expo on Saturday afternoon.

"There was also the chance to play tennis against our Belgian friends from Merelbeke while LTA president Cathie Sabin, from Shropshire, kindly travelled out to Merelbeke on Sunday morning to enjoy breakfast and help us exchange gifts with our hosts. That was a lovely touch from Cathie on such a busy weekend for her."

Dave was then delighted to return to the Flanders Expo to witness Murray end the long wait for a British Davis Cup triumph with his straight sets victory over Goffin.

"The atmosphere was incredible," he said. "I was lucky enough to get a ticket and the noise generated for every point was fantastic. The whole manner of the victory made it all the more special."

Xavier Rits, the chairman of Merelbeke Tennis Club, said he enjoyed hosting the Shrewsbury contingent - and now he is planning a return visit to Shropshire early next year.

He added: "This was one of the most exciting things we've ever been involved in as a club. It was a lovely weekend and now some of us hope to come to Shrewsbury in February when The Shrewsbury Club host the Aegon men's professional tournament."

Judy Murray, mother of Davis Cup heroes Andy and Jamie, had spent the previous weekend at The Shrewsbury Club, holding a series of coaching wokshops with local youngsters and headlining a sports dinner.