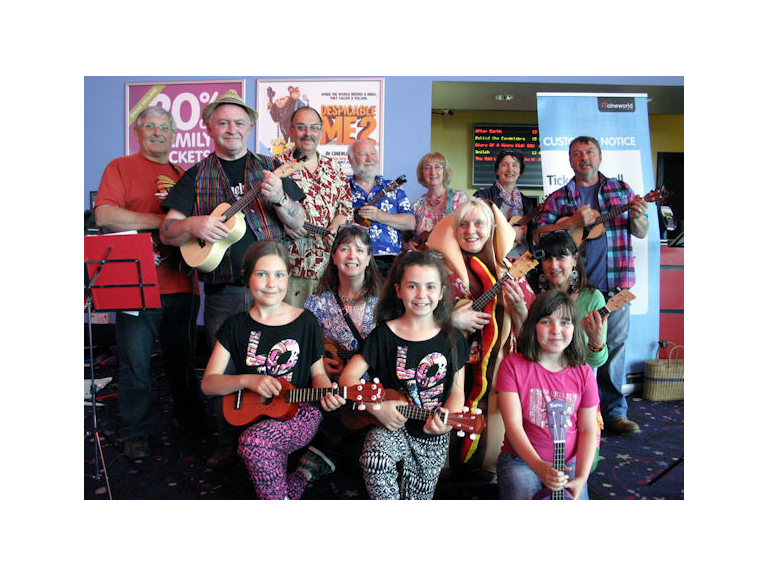 Shrewsbury Cineworld cinema which held a charity event based on the theme of a new film release has raised £470 for Hope House Children’s Hospices.

Staff at Cineworld in Old Potts Way, dressed up, baked cakes, offered face-painting, balloon animal making and juggling activities to children and their parents attending the recent launch of Despicable Me 2.

A ukulele band, made up of members from The Brickaleles in Shrewsbury and Bridgnorth Ukulele orchestra, played in the cinema’s foyer after carrying out a flash mob performance of The Beach Boys Babara Ann prior to the film’s first showing of the day in screen eight, which is also sung by two of the Crafty Minions in the teaser trailer.

Despicable Me 2 is about a character called Gru, who along with his minions are recruited to trounce an evil super villain.

Gru has a happy life of domesticity until he's abducted by Lucy Wilde (Kristen Wiig) of the Anti-Villain League and whisked to the organisation's HQ in her cool underwater car.

Gru's detailed knowledge of the evil mind is needed to help defeat a sinister new super villain named Eduardo (Al Pacino), while at same time getting to play with lots of great new gadgets and weapons.

Maddy Brine, general manager at Cineworld Shrewsbury said: “There was a hive of activity and things for children to see and do in before the film even started.

"The ukulele band played for about an hour and the public paid for requests, which of course, went towards Hope House. It was fun couple of hours and everyone enjoyed themselves.

"I would like to thank the public for their generous support and my staff and management, some of whom baked cakes and made their own costumes for the event.”