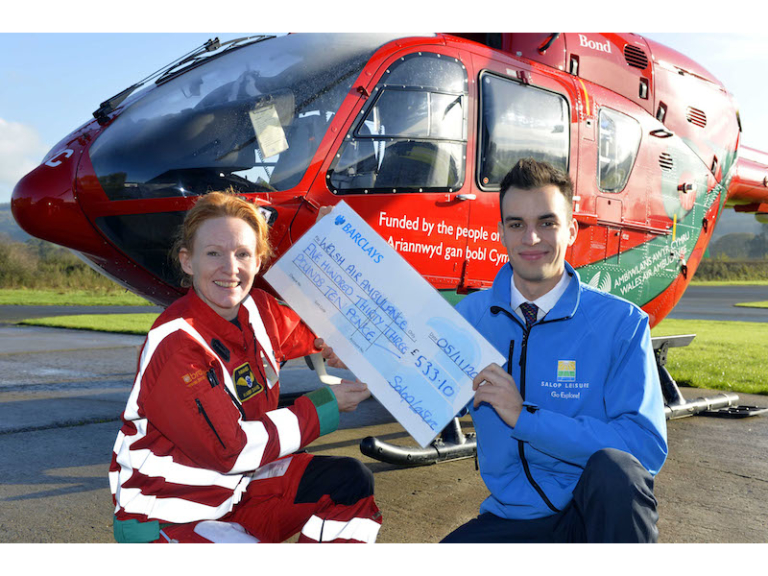 People attending the recent Mid Wales Caravan and Motorhome Show at Salop Leisure in Shrewsbury have been thanked for raising £533.10 for the Wales Air Ambulance Service.

Visitors were invited to make a donation to the service when enjoying a complimentary cup of tea or coffee at the 10-day event. Wales Air Ambulance has been adopted as Salop Leisure’s charity this year in view of the life-saving service it provides in Mid Wales, which is visited by large number of caravanners every year.

Helen Thomas, a community support co-ordinator for Wales Air Ambulance and her husband, Rhodri, a paramedic on the air ambulance based at Welshpool, attended the show on two days to promote the work of the service and to serve refreshments.

“I think it’s brilliant that Salop Leisure has chosen Wales Air Ambulance as its adopted charity this year,” she said. “The company supplies caravan parks in Mid Wales where district general hospitals are few and far between, which makes the air ambulance a very important service.

“We need to raise £6 million a year to keep our three aircraft running and we are very grateful for the generous public support that we receive.”

Tony Bywater, Salop Leisure’s chairman, thanked customers for helping to raise the £533.10 during the show for such an important charity.