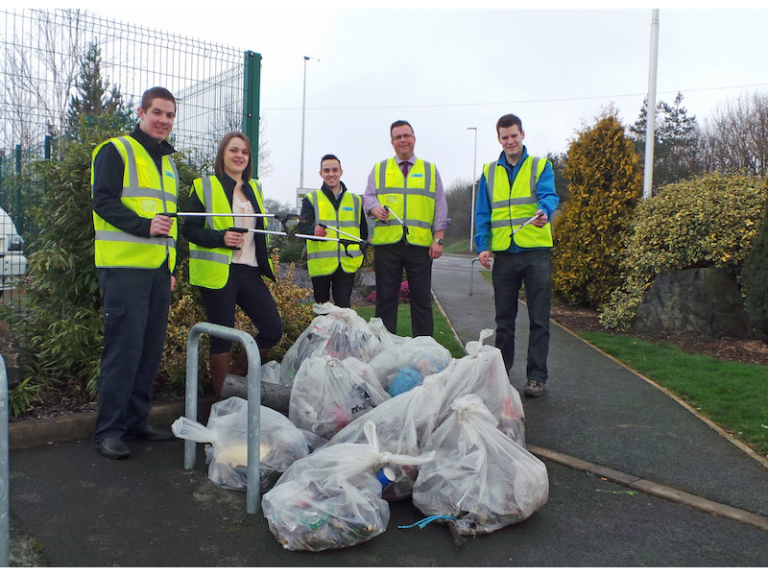 A group of volunteers picked 16 bags of litter from the roadside near the Emstrey traffic island on Shrewsbury bypass this morning (Tuesday).

The litter picking volunteers from award-winning caravan and motorhome dealership Salop Leisure, which has its headquarters alongside the island, were out giving verges a spring clean in the lead up to national Community Clear-up Day on Saturday, March 21.

They urged other businesses around the town and county to join them in taking part in the clear-up, which is backed by the Government.

Leading Salop Leisure’s litter pickers was Andy Harding, accessories store manager and chairman of the Tidy Shrewsbury Group. “In these times of austerity things aren’t being done and we all need to roll up our sleeves and take responsibility for the appearance of our communities,” he said.

“Community Clear-up Day is about bringing communities together to get them to clear their own area. It’s about much more than one day but if we can generate civic pride and draw attention to the litter issue, then that has to be positive.”

He is keen to get the authorities to clean up litter on the dual carriageway and railway embankments leading into town which, he said, were not great adverts for Shrewsbury.

Salop Leisure’s managing director Mark Bebb says the company takes great pride in the appearance of its premises and the surrounding roadside verges.

“We are proud to live and work in one of the most beautiful towns in Britain and I hope businesses and townspeople will join us in supporting Community Clear-up Day to keep Shrewsbury where it belongs,” he added.

Salop Leisure, which has recently won the UK Caravan Dealer of the Year award for the second time in three years, is a longstanding supporter of the Shrewsbury in Bloom Committee. Last year, the town celebrated victory in the Britain in Bloom Champion of Champions competition.