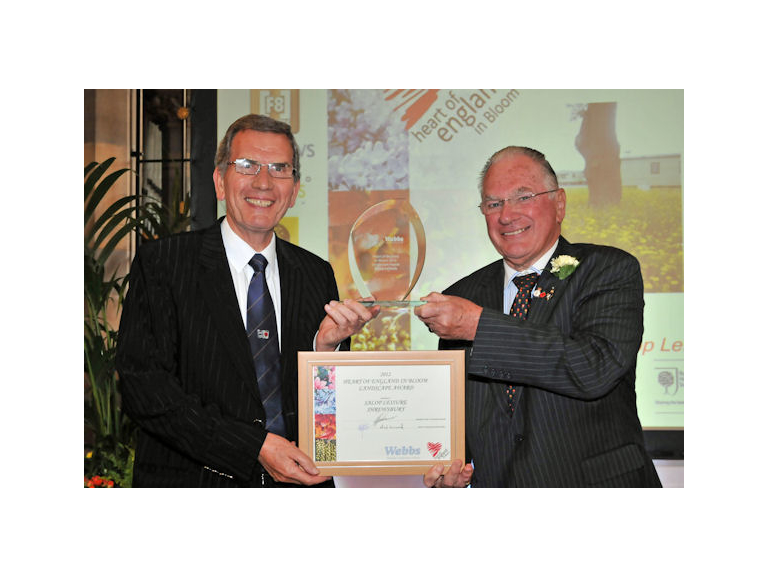 The chairman of leading Shrewsbury caravan dealership Salop Leisure has expressed his company’s pride at winning a prestigious Heart of England in Bloom award.

The company, which has is headquarters alongside Shrewsbury bypass at Emstrey, won the landscape award as Shrewsbury won the large town or small city category and now goes through to Britain in Bloom final, which it won in 2006.

“Everyone at the company is delighted to win this award because we have always taken pride in our premises,” said Salop Leisure’s chairman Tony Bywater.

“It makes our staff extremely proud that we are playing our part in making Shrewsbury such a beautiful place to do business.”

He also congratulated the Shrewsbury in Bloom Committee on its success and wished the town well in the Britain in Bloom final.

“I have never seen the town’s floral displays looking better than they have this year,” he added.

The Heart of England in Bloom regional judges began their visit to Shrewsbury, which has gained a nationwide reputation as the ‘Town of flowers’, with a reception at Salop Leisure’s headquarters earlier this summer.

In their judgment on Salop Leisure, the judges said: "This award goes to a business that, over the past year or so, has expanded.

"To do this they increased their site to adjacent land, which was open fields. The work undertaken to minimise the impact on the area has been sympathetically done.

“The mature trees remained, with the addition of an area of wildflowers sown around them, also two balancing lakes were made to take the run off water but also to provide a natural habitat for wildlife. The whole area is maintained to the very highest standard. So this award goes to Tony Bywater and Salop Leisure, well deserved."

Apart from a state-of-the-art sales centre, Salop Leisure’s headquarters also features a holiday home village, where caravan holiday homes and luxury lodges are displayed in a landscaped setting, a secure storage area for touring caravans and motorhomes and a small touring caravan park.