An appeal has been made to trace former employees of Shrewsbury’s award-winning caravan and motorhome dealership Salop Leisure for a special barbecue next month to celebrate the company’s 50thbirthday.

The barbecue is to be held at the company’s Emstrey headquarters on July 15 and chairman Tony Bywater is keen to attract as many former employees as possible to share the celebration.

Long serving receptionist Jean Courtney, who has been with the company for 41 years, has contacted many of her ex-workmates but there are some that she and Salop Leisure have lost touch with.

Former employees who have not yet been contacted are being encouraged to call Ed Glover, assistant marketing manager at Salop Leisure, on Tel: 01743 282400 for full details of the barbecue.

“We are really looking forward to meeting up with many of our former employees who have contributed towards the success of the company,” said Mr Bywater. “Salop Leisure has made giant strides forward since the company was established back in 1966 at Meole Brace, Shrewsbury and we want to than employees past and present for their contribution.”

Salop Leisure, which has satellite sales centres in Machynlleth and Stourport-on-Severn, moved from Meole Brace to its current headquarters in 2006 following a £5 million investment. The company is now established as the premier caravan holiday home, touring caravan, motorhome and campervan dealership in the Midlands and Mid Wales with a workforce of nearly 150. 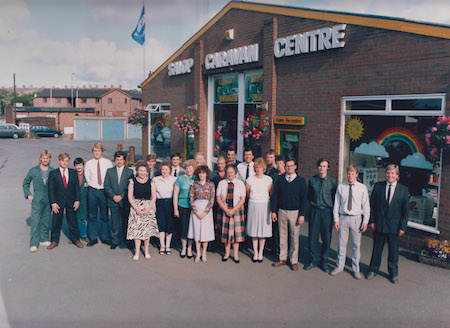