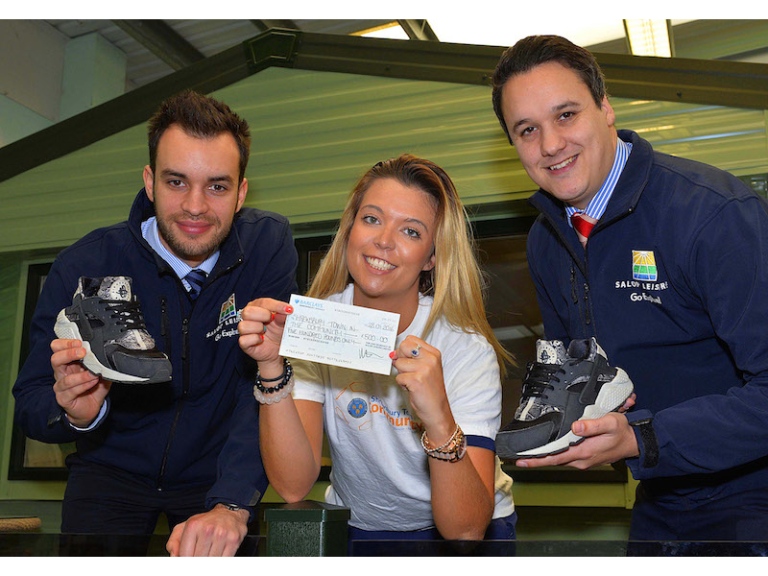 Jade Hibbert is a young woman on a fundraising mission this year. She plans to complete 21 half marathons, five mud runs and the Shrewsbury 10k race to raise at least £5,000 to support children with Down’s Syndrome and cerebral palsy who attend the Shrewsbury Town in the Community programme.

Jade, 24, who lives with her dad, Mike, at The Loggerheads pub in Shrewsbury, is education and inclusion manager with Shrewsbury Town in the Community and passionate about providing the same opportunities for children with and without disabilities.

Currently, parents of children with Down’s Syndrome and cerebral palsy have to pay for sessions with the programme, but Jade hopes to change that. The money she raises from her runs, which combined will cover 501 kilometres, will help to provide free sessions and better facilities for the children.

To support her fundraising challenge, Shrewsbury’s award winning caravan and motorhome dealership Salop Leisure has agreed to sponsor her to the tune of £500 to cover the entry fees for the events.

The company is celebrating its 50t birthday this year and chairman Tony Bywater said he was impressed by Jade’s energy and passion to provide opportunities for young people in Shrewsbury.

“I’m so appreciative of Tony’s support because finding the entry fees for all the events was the only thing worrying me,” said Jade. “It was an absolute joy presenting to Tony and I look forward to working with him this year.”

She explained that the decision to run 21 half marathons, starting in Wrexham on February 14 and ending in Conwy on November 20, was based on this year being the 21st anniversary of the Shrewsbury Town in the Community programme. As Wrexham Half Marathon falls on Valentine’s Day, Jade’s boyfriend, Edward Tomkiss, has agreed to run with her.

Having completed her first half marathon and mud run last year, she is preparing for an energy-sapping year, which will see her take on up to three events a month. “I am definitely going to put my body through it during 2016,” added Jade, who plays netball for Wolverhampton Ladies.

A former professional dancer, Jade was European adult freestyle disco dancing champion at 18 but was forced to retire from competing at 22 after dislocating a knee during training. She also competed at regional level in ballroom dancing.

Following her injury, she completed a degree in sports and exercise science and qualified as a teacher at Wolverhampton University before lecturing for 18 months at Telford College of Arts and Technology.

She joined the team at Shrewsbury Town Football Club last summer as National Citizen Service co-ordinator and fundraiser and has recently been promoted.

“I had 17 lovely years as a dancer and it was such a privilege to be able to partake in sport and be given some incredible facilities,” explained Jade. “It’s now my time to give something back.

“Attending one session at Shrewsbury Town in the Community can increase the self-confidence and self-esteem of a young disabled person. Just imagine what a difference it could make to them if they were able to attend 10 free sessions.

“The National Citizen Service is fantastic. It promotes social responsibility and educates young people about the importance of volunteering and committing time to their community. Last summer and autumn, 70 young people involved in the Shrewsbury Town in the Community programme raised £6,000 for charities in the town.”