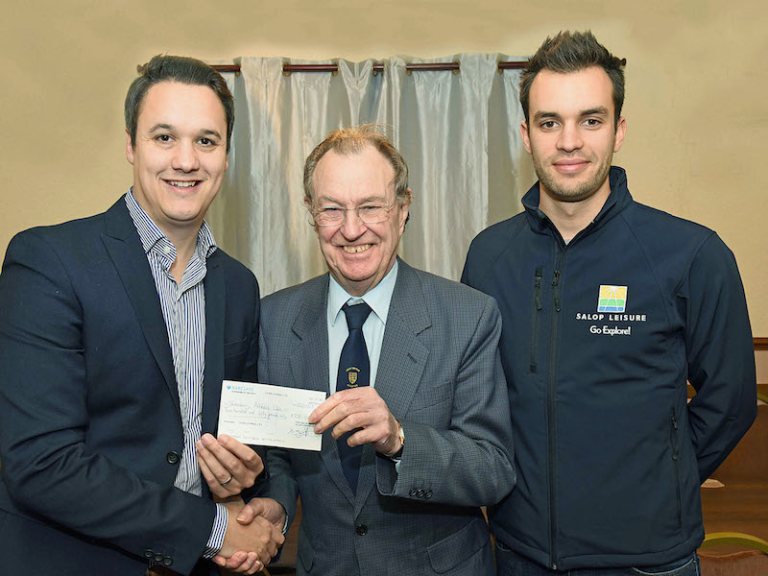 The club, which has 200 members from the age of nine up to veterans, has received an initial cheque for £250 from Salop Leisure with talks about further financial support planned for the new year.

Based at Shrewsbury College’s running track, the club needs to find £1,000 to cover additional costs. The club currently has a waiting list for the under 11, under 13, under 15 and under 17 age groups due to its popularity.

The junior section competes in the Shropshire Young Athletes League, track and field and cross country, with club members Hollie Williamson finishing third in the 80 metres hurdle at the English Schools’ Championships

The senior track and field team has men and ladies competing in the Midland Track and Field League, while the senior distance running group competes in road, track, fell and cross country event.

Training takes place throughout the year on a Monday and Wednesday evening with a floodlit track and a range of indoor facilities available during the winter.

Probably the club’s most famous ex-member is Robbie Brightwell, who captained Great Britain at the 1964 Olympic Games in Tokyo, where he was a silver medallist in the 400 metres relay team.

“The club aims to promote athletics in Shrewsbury and to give opportunities for boys and girls to progress to the top,” explained club president Derek Hayward. “We are a feeder club, which means that when our athletes become successful they tend to join bigger and better clubs who compete at a higher standard.

“We are very grateful for the support of Salop Leisure and look forward to exploring other potential avenues of financial support early in the new year.”

The club holds a number of events throughout the year, including the Mad Jack’s 5 multi-terrain race held in conjunction with the National Trust at Attingham Park last month.

“We are delighted to support Shrewsbury Athletic Club, which provides valuable opportunities to people of all ages to compete and stay fit and healthy. As part of the company’s 50th anniversary celebrations in 2016, we are investigating how we can work more closely with the club by potentially sponsoring events.”