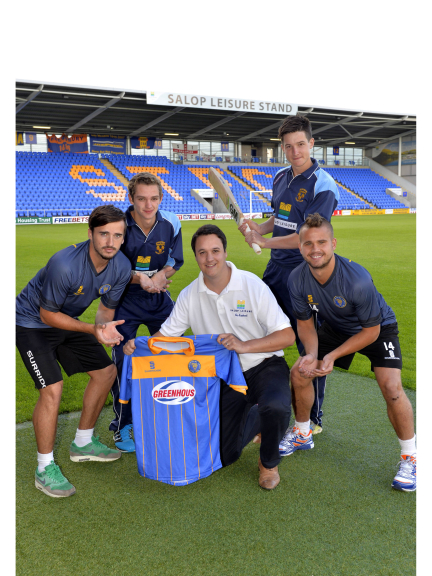 A leading Shrewsbury-based business and two of the town’s top sports clubs have joined forces to attract new spectators to cricket and football matches.

Season ticket holders at Shrewsbury Town Football Club, those wearing the club’s football shirt and anyone picking up a flyer at the club’s two pre-season friendlies at the Greenhous Meadow against Chesterfield on July 12 and West Brom on July 15 will qualify for a free drink at Shrewsbury Cricket Club’s Salop Leisure Knockout T20 Trophy tournament, which begins on Friday (July 11).

In addition to sponsoring the exciting T20 tournament, award-winning caravan dealership Salop Leisure has agreed to pay for the drinks in the hope that more spectators will be encouraged to watch Shrewsbury Cricket Club this year.

The format of the popular Salop Leisure Knockout T20 Trophy tournament has been changed this year. Rather than holding the tournament on one day – a Sunday in August - as in previous years, it will be spread over three Friday evenings.

Shifnal, last season’s beaten finalists, will take on Oswestry on July 11, holders Shrewsbury face Whitchurch on July 18 and the winners of both matches meet in the final on August 1. All the matches start at 6.15pm and are hosted by Shrewsbury Cricket Club.

“We hope this new format will attract more people to the club across the three fixtures and create an atmosphere similar to what the county T20 game has done by switching to a Friday night to get bigger crowds,” said Scott Higgins, sales and marketing manager at Salop Leisure, tournament sponsor.

“Hopefully, this offer will attract football fans, who may never have been to the cricket club before, to see the high standard of cricket on display from the county’s top cricketers – it may make them want to come again!       “Obviously the football club also hopes to attract cricket fans to cheer on Shrewsbury Town during the football season.”

Ed Foster from Shrewsbury Cricket Club said playing the tournament over three Friday evenings would also overcome issues of finding an available Sunday in the fixture list towards the end of the season.