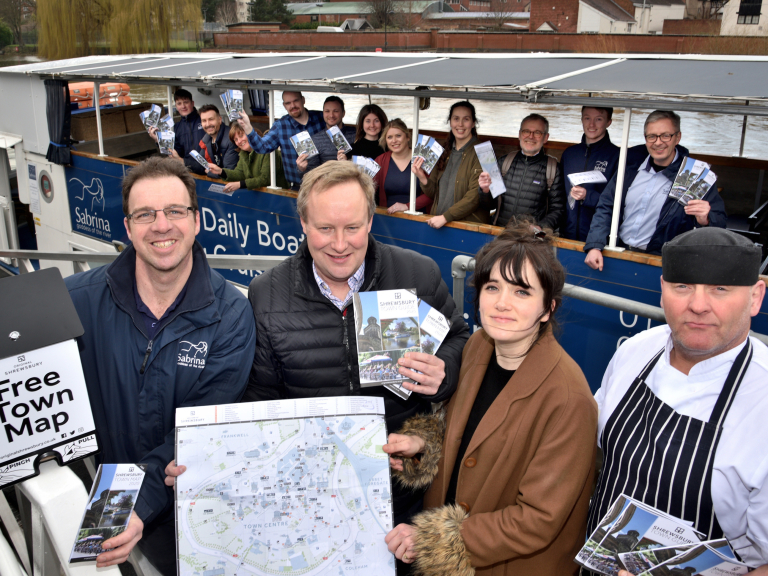 Following days of being in the national TV spotlight as the River Sever flooded parts of the town, Shrewsbury’s tourism attractions, shops and hospitality businesses have an important message for the outside world: “We are open for business.”

An upside of the television cameras focussing on some flooded parts of Shrewsbury was that they captured the resilience of the town’s traders and residents. The downside is that many viewers still think the town is under water, which could not be further from the truth.

Yesterday (Thursday), the sun was shining as traders gathered together for a photocall not just to launch Shrewsbury Tourism Association’s new town guide and map, but to let people from outside the town know that it’s business as usual.

Known as the Town of Flowers and home of naturalist Charles Darwin, Shrewsbury is also famous for its wide selection of independent shops, charming streets, tourist attractions and abundant places to eat and drink.

“After all the recent challenges Shrewsbury has had to contend with, local businesses are working together to promote trade and get tourists and shoppers back into the town,” said Edward Goddard, Shrewsbury Tourism Association chairman.

“There has been great camaraderie from local businesses and now we need people to come and support them. Shrewsbury is most definitely open for business.

“Everybody is very supportive of what we are trying to do. There has been extensive publicity for the town on national TV, which has shown the community spirit at its very best. However, a negative side of the publicity is that some people believe we are still flooded which is totally untrue.

“The flood barriers have gone and businesses are keen to get some trade through their doors.”

The resilience of the business community is highlighted by Dave Gater, head chef at The Armoury, located alongside the River Severn. The pub and restaurant were closed for just two hours – at the peak of the flood – last week as pumps kept flood water at bay.

“Many of the people that came to The Armoury during the flood were thankful and appreciative that we were open because their homes were under water and they wanted somewhere for respite from the doom and gloom,” he explained.

“We had a roaring fire burning and served hot food. We did what Shrewsbury does best – look after people.”

Dilwyn Jones, who runs Sabrina passenger boat tours on the River Severn at Shrewsbury, said: “We want to let people know across the country that Shrewsbury is up and running and open for business. Come and visit our beautiful, historic town.”

Dilwyn lost the first week of the Sabrina season due to the flood but plans to be up and running in the next couple of days.

Alex Chidley-Uttley, from wine merchants Tanners Wines, revealed that the company is raffling a large, artisan chocolate egg to raise money for Shropshire Flood Relief Fund to support people whose lives have been affected by the floods.