Shropshire-based caravan and motorhome dealership Salop Leisure has won a coveted national award for the third time in five years.

Top of the tourers

The company, which has been in business for 50 years and employs around 200 people at sales centres in Shrewsbury, Machynlleth and Stourport-on-Severn, has been named the top supplying dealership of new touring caravans in 2017 following owner satisfaction surveys undertaken by The Camping and Caravanning Club.

The first ever combined Owner Satisfaction Awards were run by the club in partnership with Practical Caravan and Practical Motorhome magazines. The award is based on surveys undertaken by the club throughout 2016.

The surveys, sponsored by Club Care Insurance, invited feedback from club members and campers, caravanners and motorhomers on camping units they had bought, owned and used since January 2013. Nearly 5,000 owners responded and the results were announced at the awards ceremony held at The Midland Hotel, Manchester on Thursday last week.

Salop Leisure had previously twice won Practical Caravan’s Dealership of the Year Award, the predecessor to the new awards, in three years.

The Camping and Caravanning Club’s president and TV presenter Julia Bradbury congratulated Salop Leisure and the other award winners.

“Potential tent, caravan and motorhome buyers trust the opinions of other owners above anything else,” she said. “That’s why the results of the Owner Satisfaction Awards are so important. They help fans of camping and caravanning spend their money more smartly, and help manufacturers and retailers improve their products and services.” 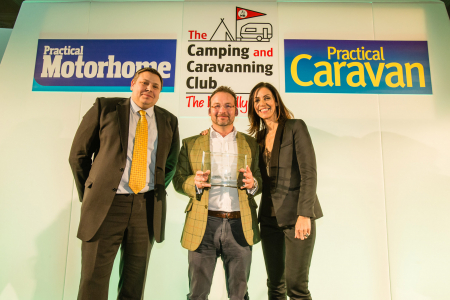 Salop Leisure’s managing director Mark Bebb said: “This is a fantastic reward for all the hard work and effort by the team and our continuing investment in the company. We are proud that the award is based on feedback from customers, who are at the centre of our business. Our company mission is to ensure that we treat people fairly and try to give the best customer service in the industry.

“I think what sets our company apart from competitors is our ethos and people. Making our customer service and reception staff and engineers available seven days a week ensures that our customers get what they need as quickly as possible. In the past, customers may have had to take time off work to bring in their caravan for service. Now they can wait until the weekend to book it in.

“We have many customers from across the country that have been loyal to us since the company started 50 years ago. We are proud to say that we have three generations of some families as customers.

“We work closely with manufacturers and the industry supply chain to ensure that we drive service standards ever higher to give our customers a better experience. We truly believe that if we look after our customers, they will not only return but also bring their friends with them.”

Having moved its headquarters to Emstrey, alongside Shrewsbury bypass in 2006, the company enjoyed its most successful year for a decade in 2016 and is predicting an even busier new year, as more people plan to spend their holidays in the UK instead of jetting overseas.

Salop Leisure aims to be a one stop shop for customers, who can buy, service, repair and store their touring caravans, caravan holiday home, luxury lodges, motorhomes and campervans in Shrewsbury. The company’s headquarters has become a tourism destination, as it houses Love Coffee restaurant and Love Plants, a specialist plants centre. On site facilities also include secure caravan and motorhome storage.

The company’s headquarters is easily accessible on the outskirts of the town and is just 40 minutes from Birmingham and 25 minutes from the M6. Customers travel from across the UK but the majority come from the West Midlands, The Potteries and North West England.

Salop Leisure is now in the process of building a pioneering Love2Stay touring and glamping resort alongside it headquarters, which is planned to open at Easter. The £4 million development includes 120 fully serviced touring pitches, 20 luxury glamping safari lodges, a fitness and wellness centre, a BIOTOP natural pool, boot camp, assault course, a recreation pool and a Cinedrome.