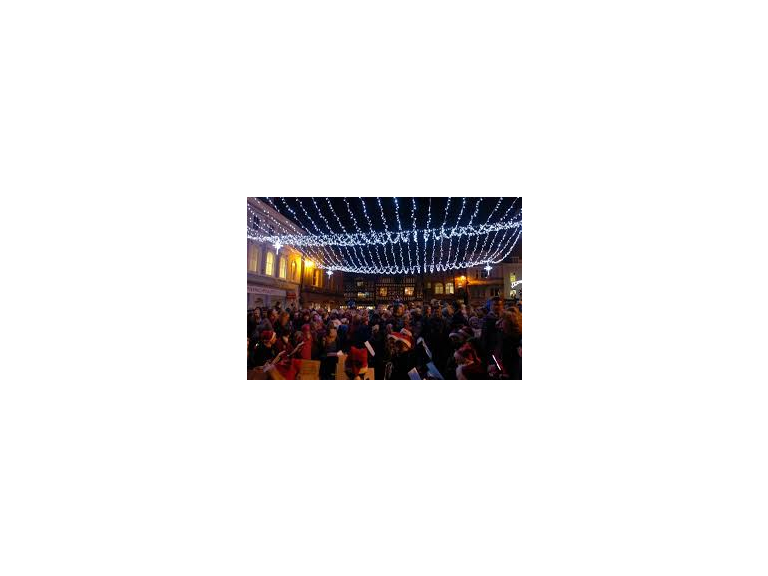 The switch-on is being organised by Shrewsbury Town Council, in partnership with Shrewsbury Shopping Centres, Shropshire Council and Shrewsbury BID, which is sponsoring the event.

The merriment commences on November 18th, from 5pm, when bands, choirs and acoustic acts are set to fill the town with seasonal music to mark the start of late night shopping and the launch of the Christmas lights display.

Switching on the lights this year will be stars from Theatre Severn's pantomime, Dick Whittington, and the Mayor of Shrewsbury, Councillor Miles Kenny.

The ever-popular lantern parade will also make a return and will set off from the Darwin Centre at 6.15pm (collection from 5pm), winding its way through the town before leading into the Square for the official countdown at 6.30pm.

Participants can make a lantern for free at a workshop being held on November 14, from 11am until 3pm, in the former British Heart Foundation Unit in the Darwin Shopping Centre. They will then be invited back to take part in the parade as part of the Christmas Cracker celebrations.

If that weren't enough excitement, Santa and his sleigh will also be on Pride Hill from 4.30pm until 8.30pm, courtesy of the Rotary Club of Shawbury & Mid-Shropshire, and Jack the Jester will entertain with his Light Show on High Street, outside the Wheatsheaf, from 5.45-6.15pm and 6.45-7.15pm.

The evening will also see the return of the Darwin Centre's spectacular giant reindeer which will have its very own switch-on to coincide with the Square countdown at 6.30pm.

For the first time, Shrewsbury's Eat Street will also be a part of the festivities and will be held at St Alkmund's from 4pm until 10pm. In addition, Shrewsbury's shopping centres will remain open for late night shopping until 8pm and the town's Market Hall will stay open until 9pm. Shoppers will receive a warming complimentary glass of mulled wine and a mince pie at the market, which celebrates its 50th anniversary this year.

Mayor of Shrewsbury, Councillor Miles Kenny said: "Christmas is so exciting and the switch-on always kick-starts the season with a bang. Peace, goodwill and fun. There's something for everyone to make this Christmas memorable."

Kirsten Henly, Shrewsbury BID Manager, said: "This event marks the start of the busy festive period for our retailers and hospitality businesses, so we're delighted to be sponsoring the Lights Switch On evening for the second year. We're all set to give a warm welcome shoppers and visitors and make it a great Christmas season in town."

There will be free parking from 4pm at Abbey Foregate, St Julian's Friars & Frankwell Main Long Stay Car Parks each Wednesday starting from the Christmas Lights Switch-On, until December 23rd.