Shifnal caused an upset by beating neighbours Bridgnorth in the Salop Leisure Knockout T20 Trophy final at Shrewsbury Cricket Club to be crowned the new champions. 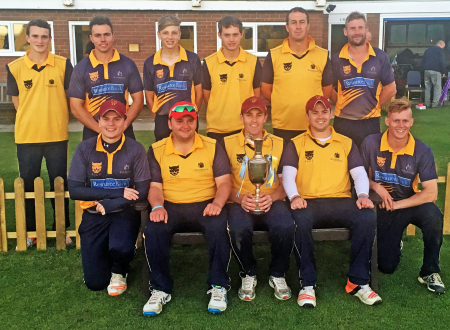 The Auction House Birmingham and District Premier Cricket League second division team posted 147 for four in their 20 overs with opener Anthony Parker (36) and Chris Murrall (39) putting on 71 for the second wicket before Llyr Thomas (24) and captain Tom Collins (34 not out) guided them to what proved a too challenging target.

Sam Whitney took two wickets for 38 for Division One team Bridgnorth who appeared to be in with a shout of chasing the total until they lost their fourth wicket on 92. The remaining six wickets fell for just eight runs as they faltered to 109 all out with two overs remaining.

Openers David Exall (39) and S. Williams (15) put on a promising 61 for the first wicket and Whitney added 18, but Bridgnorth had no answer to spinners Collins and Murrall, who took four wickets apiece.

Earlier, in the tournament semi-finals, Shifnal had beaten Oswestry and Bridgnorth had knocked out hosts and defending champions Shrewsbury.

Ed Foster from Shrewsbury Cricket Club congratulated Shifnal on their victory, which he said underlined the strength of cricket in Shropshire. He wished the club success in its drive for promotion to Division One this season.

“Shropshire cricketers are grateful for the Salop Leisure T20 tournament, which gives them the opportunity to play against county teams from different divisions of the Birmingham League,” he added. “Shropshire cricket has always been strong, which is highlighted by Shifnal coming through to win the trophy, just like Oswestry did a couple of years ago.”

Scott Higgins, holiday home sales and marketing manager at Salop Leisure, congratulated Shifnal who he described as worthy champions. He also thanked Shrewsbury Cricket Club for hosting another successful tournament, despite the intervention of the weather at the semi-final stage.