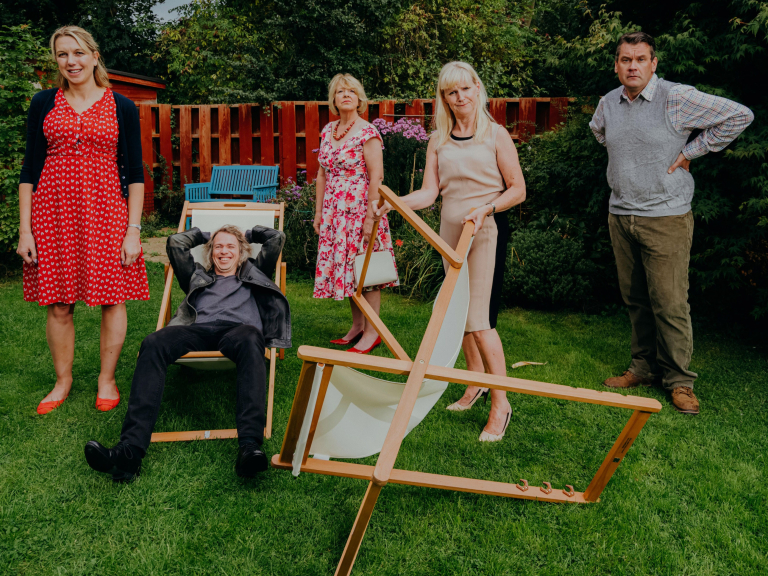 Early bird tickets are now on sale for Shropshire Drama Company’s forthcoming production of Alan Ayckbourn’s comedy Round And Round The Garden at Theatre Severn, which takes place from 06 to 09 November and celebrates a double milestone for the playwright.

Set over a weekend in July, the play centres round Annie who has arranged to go away for a respite break from looking after her bedridden mother. In order to facilitate this her brother Reg and his wife Sarah have agreed to take over the care of their mother during her absence.  However, the question that intrigues them is whether she is going away solo or with a companion, possibly the local vet Tom who seems to be a regular caller.  Brother-in-law Norman turns up bringing mayhem in his wake, and then later his wife Ruth. Chaos and hilarity ensue as Annie’s plans unravel, resulting in a memorable few days together but for all the wrong reasons!

Commenting on the play, Rosalind Garrard who is directing the play together with Michèle Rowland-Jones, said: “2019 is the year of Sir Alan’s 80th birthday and the 60th anniversary of his first professional production, so we decided to celebrate by staging this play which is one of the three that makes-up his famous Norman Conquests trilogy. Our performance of Bedroom Farce two years ago proved to be a very popular choice with audiences, so we hope this very funny play will have similar appeal.  For all who love comedy, this is one not to be missed!”

Performances of Round And Round The Garden start at 7.30pm in the Walker Theatre at Theatre Severn and early bird tickets are £15 up until 01 October. Concessions are available after that for students and block bookings of ten or more people. All other tickets prices are £16.50. To book contact the box office at Theatre Severn – telephone 01743 281281 – or order online at https://theatresevern.co.uk/shows/whatson/round-and-round-the-garden